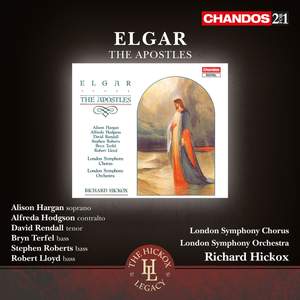 Supported by a strong cast of soloists, Hickox delivers a warmly expressive and subtly nuanced interpretation which really catches fire in the more inspired second part of Elgar's oratorio. — BBC Music Magazine, Christmas 2014, 4 out of 5 stars

Part I: And it came to pass in those days (Tenor)

Part I: The voice of Thy watchman

Part I: It is a good thing to give thanks unto the Lord

Part I: And when it was day, He called unto Him His disciples (Tenor)

Part I: Blessed are the poor in spirit (Jesus)

Part I: And straightway Jesus constrained His disciples to get into a ship (Tenor)

Part I: This shall ye have of Mine hand (Mary Magdalene)

Part I: When Jesus came into the parts of Cæsarea Philippi (Tenor)

Part I: Thy face, Lord, will I seek (Mary Magdalene)

Part I: Turn you to the stronghold (Chorus)

Part II: And it came to pass that He went throughout every city and village (Tenor)

Part II: Then gathered the chief Priests and Pharisees a council (Tenor and Bass)

Part II: Thou also wast with Jesus of Nazareth

Part II: Then Judas, which had betrayed Him (Contralto)

Part II: Whither shall I go from Thy Spirit? (Judas)

Part II: Truly this was the Son of God (Chorus)

Part II: And very early in the morning they came unto the sepulchre … (Contralto)

Part II: We trusted that it had been He which should have redeemed Israel

Part II: And when He had spoken these things (Contralto)

Inspiration for The Apostles came at an early age for Elgar who, as a child, was fascinated to learn about Christ’s disciples, ordinary men who witness the most extraordinary events. A commission from the Birmingham Triennial Music Festival gave him the opportunity to explore this theme and in 1903 Elgar wrote The Apostles, the first in a planned trilogy of works depicting the lives of Jesus’ disciples (the third, intended to follow The Kingdom, never materialised). A narrative work, it deals with the calling of the disciples and their experiences of Jesus’ preaching, miracles, crucifixion, resurrection, and ascension.

An expansive oratorio, The Apostles calls for six soloists, lavish orchestration, and large chorus. Although often overshadowed by The Dream of Gerontius, written shortly before, it contains some of Elgar’s most inspired music, particularly in the dramatic portrayal of Judas and in the exalted, moving finale.

On this ‘241’ release Richard Hickox, a true champion of British music, conducts the London Symphony Orchestra and Chorus. The two most prominent roles, Mary Magdalene and Judas, are sung by Alfreda Hodgson and Robert Lloyd, respectively. The recording also features an outstanding performance from a young Bryn Terfel as Peter. The set is released as part of the Richard Hickox Legacy series.

Supported by a strong cast of soloists, Hickox delivers a warmly expressive and subtly nuanced interpretation which really catches fire in the more inspired second part of Elgar's oratorio.