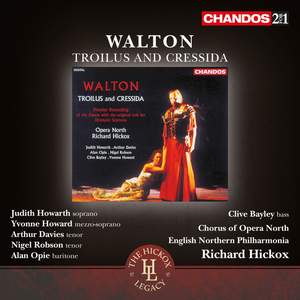 Walton: Troilus and Cressida, Act I

Back to your hovels… (Troilus, Antenor, Chorus)

Is Cressida a slave… (Troilus)

Morning and evening I have felt your glance… (Cressida, Troilus)

I haunt her beauty like a naked soul… (Troilus, Pandarus, Calkas, Cressida, Evadne)

Slowly it all comes back (Cressida)

Slowly it all comes back (Cressida, Evadne, Pandarus)

Does talking put you off? (Pandarus, Cressida, Horaste, Evadne)

How can I sleep? (Cressida)

At the haunted end of the day (Cressida)

If one last doubt, one lurking fear remains… (Troilus)

From isle to isle… (Cressida, Troilus)

Who would go drumming… (Pandarus, Cressida)

My name is Diomede… (Diomede, Pandarus)

This thing shall be revok'd… (Troilus, Cressida, Pandarus, Evadne)

So here's an end of it all (Evadne, Watchmen)

What is this sudden alarm? (Troilus, Cressida, Pandarus, Diomede, Chorus)

She has brought shame upon her father! (Calkas, Diomede, Troilus, Cressida, Chorus)

Released as a part of the Richard Hickox Legacy series, this essential recording of Walton’s Troilus and Cressida is widely recognised as the finest available.

Edward Greenfield wrote in Gramophone that ‘even among Chandos’ many bold achievements over the years, this magnificent set of Troilus and Cressida stands out... [Hickox’s] expressive warmth is matched by his understanding of Walton’s fiery side, with magnificent performances form the entire cast’.

Troilus and Cressida, William Walton’s first opera was commissioned by the BBC in 1947 although only after seven years, in 1954, did the premiere take place, in Covent Garden. For a revival in 1976, Walton removed about thirty minutes of music and adapted the soprano part of Cressida to bring it within the range of the mezzo-soprano Dame Janet Baker. The version recorded here follows Walton’s more concise score whilst returning the part of Cressida to its original soprano register.

Based on Chaucer’s classic love-tale Troilus and Criseyde, the opera represents Walton’s desire to engage with traditional operatic themes. Walton wanted to write a romantic, ‘Pucciniesque’ opera and the rich scoring and many memorable melodies certainly invite comparison.

Walton dedicated Troilus and Cressida to his wife, Lady Susana Walton, who contributes a personal note in the booklet.