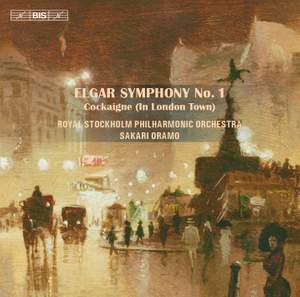 Oramo has secured a vibrant, electric orchestral sound that underpins everything, making even the slow introduction seem exuberant underneath its finely judged nobilmente breadth...The orchestra... — BBC Music Magazine, November 2014, 4 out of 5 stars More…

Conducting this all-Elgar programme is Sakari Oramo, the Finnish conductor who has been all but adopted by English music-lovers and orchestras - for ten years he was music director of the City of Birmingham Symphony Orchestra, and since 2013 he holds the post as chief conductor of the BBC Symphony Orchestra.

It was during the winter of 1900–01 that Elgar began to sketch what he hoped would turn into his first symphony. However, the sketches were quickly absorbed into several shorter pieces, one of which was the Cockaigne overture - an unashamedly populist portrait of ‘old London town’.

As for the First Symphony, seven years would pass before its première in Manchester and subsequent London performance.

Oramo has secured a vibrant, electric orchestral sound that underpins everything, making even the slow introduction seem exuberant underneath its finely judged nobilmente breadth...The orchestra offers similarly big-hearted, vital playing in Cockaigne. The opening theme kicks up its heels cheekily.

Oramo's commendably trim and purposeful conception is clearly the result of painstaking preparation and he certainly knows his way round the score; scarcely a fleck of detail escapes his eagle eye, and the antiphonally divided fiddles are an enormous boon...Oramo's reading of the main work has enough in the tank to merit investigation by any Elgarian seeking a fresh view.

Oramo uses a lot of rubato in the scherzo and at times you can feel it lurching into a slower gear with a sudden clunk. It’s like being in the car with someone who is learning how to use the clutch...That’s my only complaint about a performance which is outstanding all the way through...A First Symphony that only just misses perfection.

There’s nothing portentous about the performance: take the athleticism demanded of the band by Oramo in the Scherzo — full of bright, good-natured humour — and the dashing final Allegro. It’s good news that non-Brits can respond to this music with such affection and authenticity.

It's a finely judged and paced performance, one that avoids extremes but still manages to give a tremendous sense of cumulative momentum to the whole work...Oramo has always obtained a wonderfully refined string tone from the orchestras he conducts, and the hushed playing of the Royal Stockholm Philharmonic...is strikingly effective.