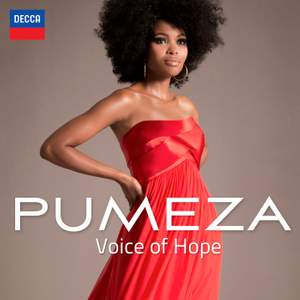 The colours in the haunting, spare accompaniment [of 'Umzi Watsha'] are conveyed with expert precision by the versatile Aurora Orchestra conducted by Iaian Farrington, who should also be congratulated... — Gramophone Magazine, Awards Issue 2014 More…

Katherine talks to the soprano about her new disc of opera arias and songs from her native South Africa.

An album charting new star Pumeza’s journey from South African Township to the Opera Houses of the world .

Growing up during apartheid in the townships of South Africa, Pumeza, by chance, heard singing from an open window at a music school. When she auditioned, the college bought her a plane ticket to London where she was immediately offered a full scholarship for the Royal College of Music.

The album celebrates her journey, with beautiful music from her native South Africa including the moving lullaby Thula Baba (Hush, My Baby), the anthem Freedom Come all Yee and music from some of the most famous operas, including Puccini O Mio Babbino Caro.

Pumeza is a leading artist with the Stuttgart Opera.

The colours in the haunting, spare accompaniment [of 'Umzi Watsha'] are conveyed with expert precision by the versatile Aurora Orchestra conducted by Iaian Farrington, who should also be congratulated for his arrangements...Pumeza's Mimi is lovingly sung...but 'O mio babbino cao' is a trifle too heavy.

Dusky, overtonerich, abundantly sensuous, the timbre has much of the fullness, freshness and purity of a Sibongile Khumalo (the doyenne of South African singers), alloyed to the darker tones of an almost Callas-like palette. The voice is marvellously controlled and suppurted in all registers; she sings without ever a hint of strain. Strikingly impressive, too, is Matshikiza’s artistry, even if one feels that this is not yet fully formed.