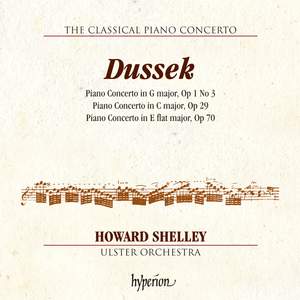 Following on from Hyperion’s hugely popular ‘Romantic Piano Concerto’ series, the ‘Classical Piano Concerto’ focuses on the lesser-known concertos from the dawn of the genre. Between about 1770 and 1820—the high classical period dominated by Mozart, Haydn and Beethoven—musicians including Clementi, Cramer, Dussek, Steibelt, Woelfl and others made their names as composers and performers of piano concertos. This series aims to be the first in-depth recorded survey of this forgotten repertoire.

This first volume features three of Bohemian virtuoso Jan Ladislav Dussek’s eighteen piano concertos, taken from different points in his career. As a group, these pieces are a fascinating study, with most of the earlier works largely reflecting the Mozartian model, and the later ones revealing stylistic traits sometimes at odds with the late eighteenth-century conception of the form, and anticipating future developments in the genre.

There could be no finer guide to the hidden gems of this repertoire than Howard Shelley, whose recordings of Clementi keyboard works, and Mozart and Hummel piano concertos, have received such acclaim. He appears here as pianist / conductor with the Ulster Orchestra.

Whatever one's reaction to and perception of Dussek's music, Shelley's role in this enterprise should not be lightly acknowledged...This is skill and dedication of a high order and I can't think of another living pianist who can equal him in this particular field of musical endeavour.

This disc presents three refreshing and delightful pieces to launch a new classical piano concerto series from Hyperion...One must applaud both Hyperion’s enterprise and Shelley’s dedication to bring this music to our attention.

Shelley has been a stalwart of the Romantic series of concertos, and so it seems fitting that he has been chosen to do the honours here. He brings his customary elegance to every bar, and it's a delight to listen to him, with immaculate passagework and tender playing in the slow movements. I look forward to hearing further volumes in this series!