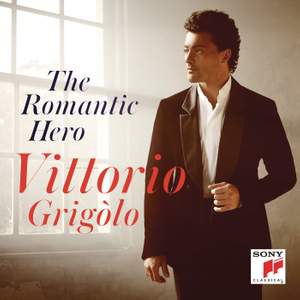 Throughout, indeed, Grigòlo shows genuine aptitude for much of the material here in terms of the delicacy and tonal variety he brings to its lyric charms. ‘En fermant les yeux’ from Manon is... — Opera, August 2014 More…

Established as one of the world’s leading Italian tenors, an integral vehicle in Vittorio’s operatic trajectory has been French opera. His extraordinary international breakthrough came in the role of Des Grieux in Massenet’s Manon alongside Anna Netrebko at the Royal Opera House in 2010. He astounded the audience and critics:

‘The birth of a star’ - EVENING STANDARD

The following year critics applauded his return to the Royal Opera House London to sing the title role in Faust alongside a stellar cast including Angela Gheorghiu, René Pape and Dmitri Hvorostovsky.

His previous professional appearances in key French repertoire also include performances as Romeo in Romeo & Juliette at both La Scala and Los Angeles Opera (both in 2011) and the title role in Zürich Opera House’s production of Les Contes d’Hoffmann that same year.

“In this very special album, my first departure into the French repertoire, I wanted to look back on and explore the kind of figure that is the true romantic hero. It’s the hero that makes me feel alive when I am on stage. I chose the French hero because each aria is special for me in a certain way, and reveals something hidden inside me. For example, the love in Roméo et Juliette is very intense, quite unlike anything today, when everything is so fast. Is it still possible to love like this, to know this kind of feeling?

Manon, Les Contes d’Hoffmann and Le Cid –the roles in these works encompass every aspect of the French hero. Again that is part of the reason for my choice. The Italian way of singing is native to me. But sometimes in life we change course to follow a sign that is not the one of our birth; instead we go forward in the ascendant. The French hero is my ascendant. Though I started learning to sing using the Italian bel canto technique, I have now got to the point where I am conscious of what I can express in, what I have to say about, the French hero. And that is partly because of my natural temperament. When I was a kid, I was always the hero, I was too much, I had to rein myself in; now I don’t need to, because I can use that aspect of my personality on stage in these marvellous French operas and everybody loves it. What was excessive then in a child works well now for the stage.”

Throughout, indeed, Grigòlo shows genuine aptitude for much of the material here in terms of the delicacy and tonal variety he brings to its lyric charms. ‘En fermant les yeux’ from Manon is appropriately dreamy, while ‘Ah! fuyez, douce image’ is convincingly impassioned.

His technique is firmly based and the voice has a smooth yet vibrant timbre which projects brightly and steadily….What is less appealing is the exaggerated lachrymose intensity...Evelino Pidò and the RAI Orchestra provide sensitive accompaniment.