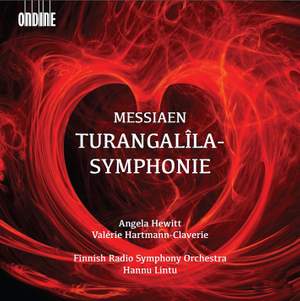 The Turangalîla-Symphonie is one of Messiaen’s stand-out masterpieces from the 1940s, and is well known for its large orchestral forces and prominent parts for both the piano and the rarer electro-acoustic ondes Martenot.

Although hailed as one of the great milestones in 20th century classical music, Turangalîla is an approachable work, divided into ten discreet movements that depict themes of love, using recurrent musical images, motifs and reference points.

Angela Hewitt is one of today’s leading pianists and well known as one of the world’s foremost interpreters of Bach. Valérie Hartmann-Claverie is an expert ondes Martenot player and is regularly involved in premiering new works for this unique instrument and teaching it at the Paris Conservatoire National.

Hannu Lintu and the Finnish RSO are well known for their interpretations of 20th century composers. This disc follows on from their highly successful recording of Ligeti works (ODE 1213-2 Gramophone Editor’s Choice).

Lintu's awareness of internal balance is masterly. The machine-like tutti that follows the first-movement piano cadenza marches relentlessly forwards, strings crooning high above the extreme bump and grind of wind and percussion; in the genteel sixth movement Lintu makes Messiaen's competing layers dance sensually around each other.

this is a performance of distinctive, evocative character, full of pertinent, dramatic incident and structured with confidence and vigour.