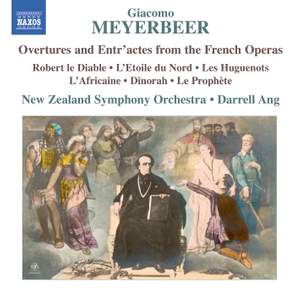 Meyerbeer: Overtures and Entr’actes from the French Operas

Giacomo Meyerbeer’s eminence as an operatic composer was such that the works he wrote for the Paris Opéra between 1831 and 1865 – Robert le Diable, Les Huguenots, L’Africaine and Le Prophète – were among the most spectacular and popular, well into the twentieth century. These overtures and orchestral pieces illustrate the power of Meyerbeer’s writing, his sense of drama, his orchestral colouring, and his melodic beauty. L’Etoile du Nord and Dinorah, written for the Opéra Comique, are lighter in tone, but notable for their programmatic inventiveness.