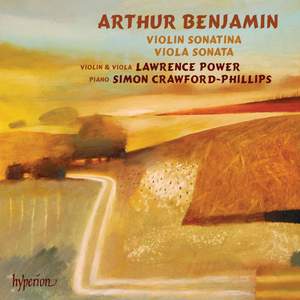 Whether playing his viola or violin, Lawrence Power is in total sympathy with Benjamin's shifting moods, and Simon Crawford-Phillips proves a lithe and responsive piano partner. — BBC Music Magazine, July 2014, 4 out of 5 stars More…

I. Arabesque (The Muted Pavane)

Benjamin, A: From San Domingo

Lawrence Power is Britain’s greatest living viola player, the true successor to Lionel Tertis and William Primrose. Part of his mission is to perform and record music premiered by those masters of the previous century, including works by York Bowen, Ralph Vaughan Williams, Benjamin Dale, William Walton and, here, Arthur Benjamin.

Benjamin was one of the first Australian musicians to forge an international reputation. His creative output, which encompasses about eighty works altogether, manifests a great variety of idioms and genres. It includes a good number of light-music miniatures, many of them infused with a jazz or Afro-Caribbean flavour: the most famous of these is the Jamaican Rumba which concludes this album.

This album represents something of a departure for Lawrence Power’s recording career: he performs Benjamin’s Violin Sonatina on the violin. This ambitious, virtuosic and formidably accomplished work is not at all diminutive—perhaps the lack of a slow movement was felt to debar it from full sonata status.

Benjamin’s Viola Sonata is a wartime piece, with a first movement of dark foreboding. It manifests a spiritual affinity with the large-scale and often elegiac Symphony that Benjamin was about to begin composing, and it contains the bleakest and perhaps the most deeply felt music on the present album. It is an impressive, powerful and virtuosic work, with many technical challenges, all of which Lawrence scales with his usual astonishing prowess.

Whether playing his viola or violin, Lawrence Power is in total sympathy with Benjamin's shifting moods, and Simon Crawford-Phillips proves a lithe and responsive piano partner.

Although Lawrence Power is not quite as characterful or fine-grained a fiddler as he is a viola-player, there's precious little with which to take issue about his alert and sensitive advocacy. His interpretation of the tremendous Viola Sonata is truly magnificent, and he receives impeccable support throughout from Simon Crawford-Phillips.

Power’s viola sound has a notable seductiveness, a sort of electric sweetness, but his genius for phrasing is as effective in Benjamin’s 1924 Violin Sonatina (more substantial than the title suggests) as in his searching 1942 Viola Sonata, the focus here.