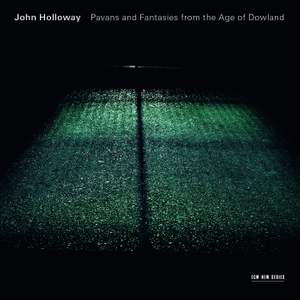 Pavans and Fantasies from the Age of Dowland

Dowland himself was prepared to countenance performances with violin consort. This is the less familiar route Holloway and his colleagues have chosen, deploying four violas atop a bass violin...The... — BBC Music Magazine, October 2014, 4 out of 5 stars More…

Purcell: Fantasy Upon One Note

Locke: Fantasy For 2 Trebles And Bass (From "The Broken Consort")

In this remarkable recording, baroque violinist John Holloway creates a programme around the Lachrimae Pavans by John Dowland. Threaded between Dowland’s masterpieces are works of other major composers of his era - Henry Purcell, William Lawes, John Jenkins, Thomas Morley and Matthew Locke. In bringing together these pieces of strongly contrasting colour and character, Holloway and his musicians give a vivid sense of the great flowering of consort music which took place in England in the 17th century.

John Dowland’s Lachrimae Pavans is considered one of the greatest works in the canon of English chamber music. Based upon his famous song 'Flow My Teares', the seven pavans - Seaven Teares, as Dowland called them - present an extraordinary exploration of the contrapuntal and harmonic possibilities offered by the theme.

Believing the composer offered possibility of performance by five string players without lute, Holloway and company play Dowland’s pavans with the instrumentation of four violas and bass violin. As Holloway puts it: “As has been said of Dowland, his greatest works are inspired by a deeply felt tragic concept of life, and a preoccupation with tears, sin, darkness and death. With that in mind, this choice of instruments (rather than transposing the music into a higher key) made itself.”

One of the most experienced concertmasters in the ‘Early Music’ world, John Holloway has led orchestras for such diverse directors as William Christie, Christopher Hogwood, Gustav Leonhardt, Ton Koopman, Jean-Claude Malgoir and Nicholas McGegan, and was for many years leader of Roger Norrington’s London Classical Players and Andrew Parrott’s Taverner Players. In 1999 he was appointed Professor of Violin (modern and baroque) and Chamber Music at the Hochschule für Musik in Dresden. Since 1997 he has made a number of acclaimed recordings for ECM New Series, including Bach’s Sonatas and Partitas for Violin solo, Biber, Schmelzer, Muffat, Leclair, Castello and others.

Dowland himself was prepared to countenance performances with violin consort. This is the less familiar route Holloway and his colleagues have chosen, deploying four violas atop a bass violin...The result is predictably brighter,more edgy than viol performances, and the playing is superbly fastidious and concentrated.

If the instrumentation is unusual (four violas and bass violin), it works beautifully, the sound fuller and less sinewy than a viol consort.

Dowland's famous Lachrimae Pavans are usually heard on viol consort, but the composer also specified violins, and John Holloway's group, playing with glassy tone but also intense expressiveness, capture the heartache at the core of this great music