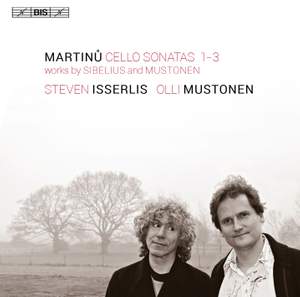 These are performances to treasure and comprise the finest renditions of the Martinu Sonatas I have come across...There is a profound understanding and sympathy for Martinu's melodic and rhythmic... — BBC Music Magazine, July 2014, 5 out of 5 stars More…

Bohuslav Martinů produced a huge catalogue of chamber music for a variety of instruments. The cello seems to have occupied a special place in his heart, however, and the three cello sonatas were probably of great significance to him; each of them has an entirely distinct character and appears to owe something to extra-musical events. The most dramatic of the three, the First Sonata was written in Paris in May 1939, shortly after Martinů’s Czech homeland had fallen to the Nazis. Having fled Paris in 1940, Martinů composed Sonata No.2 shortly after reaching safety in the USA, and the work celebrates the rhythms and the verve of the new world. Although written in memory of a deceased friend, the Third Sonata is still more celebratory: even the slow movement is pastoral rather than tragic, while the finale – or at least its ending – ‘would hardly be out of place at a rodeo’, as Steven Isserlis writes in his own liner notes to this disc. Throughout the sonata there are other hints of an American influence, but as Martinů himself wrote around the time of its composition: ‘My work is still Czech and connected to my homeland.’ Interspersed with these ‘Czech’, mid-20th century sonatas are two Finnish works composed at the very edges of that century. Jean Sibelius' Malinconia was written in 1900, shortly after the death of the composer's infant daughter Kirsti. Deeply personal, but also suffused with the sounds of nature, it is an extraordinary piece –‘a tone poem for cello and piano’ is how Isserlis describes it. The final work of the programme is a Sonata from 2006 by Olli Mustonen, who has composed for almost as long as he has played the piano. Isserlis and Mustonen have been friends and collaborators for close to twenty years, and now join forces in this exciting and varied programme.

These are performances to treasure and comprise the finest renditions of the Martinu Sonatas I have come across...There is a profound understanding and sympathy for Martinu's melodic and rhythmic idiom.

Isserlis and Mustonen enjoy considerable chemistry and are so much in the moment that matters of continuity and architecture are mainly taken care of by their headlong momentum. Isserlis makes lower registers growl...Mustonen relishes the interruptive qualities, the outbursts and abrupt changes of direction with a sonority that one might describe as aggressively crystalline.