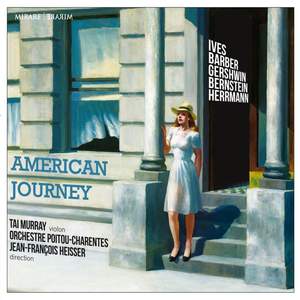 Herrmann, B: Psycho Suite for Strings

I. Prelude - The City - The Rainstorm

VI. The Stairs, The Knife and The Cellar

Whilst still influenced by the traditions of Western Europe, 20th century American music was also a testing ground for new techniques. From the neo-classicism of Bernstein's 'Serenade' to the outstanding professionalism of Bernard Herrmann's film scores, via the vitality of Gershwin and the innovations of Charles Ives, to the poetic lyricism of Barber's 'Adagio', this CD presents five very different facets of a journey into the New World.