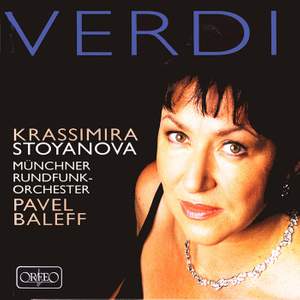 The singer is in good voice throughout and her technique is enviable as ever. — Gramophone Magazine, May 2014 More…

Krassimira Stoyanova is one of the most renowned Verdi sopranos today: here she presents roles she has either already sung all over the world or which she is booked to sing shortly. As Desdemona she has moved and enthused audiences and critics alike from Vienna to Barcelona and Chicago and so from 'Otello' we naturally find her “Willow Song” and “Ave Maria”. In Verdi’s operas after Schiller, 'Don Carlo' and 'Luisa Miller', Stoyanova made her celebrated debuts as Elisabetta and Luisa Miller at the State Operas of Munich and Vienna respectively. Since then she has become especially known both for her ability to shape a perfect line and for her characterisation of these two women, caught as they are between love and duty. The two Leonoras in 'Trovatore' and 'Forza' make more dramatic demands on the voice, and Krassimira Stoyanova is approaching these roles with prudence: she has not yet taken the latter completely into her repertoire. The dates for her Aïda in the eponymous opera and as Amelia in 'Un ballo in maschera' have now been fixed, and she can also be heard in excerpts from both roles, as well as Giovanna d’Arco and the dying Violetta Valéry, in this new CD, with the Munich Radio Orchestra under Pavel Baleff. One marvels at Krassimira Stoyanova’s artistry: unmannered, unostentatious, refined, as she does justice both to the girlishness of Verdi’s 'Joan of Arc' and to the wrenching farewell offered us by 'La Traviata'.

The singer is in good voice throughout and her technique is enviable as ever.

Stoyanova is very committed emotionally … Pavel Baleff does commendably with the Munich Radio players, impressing from the start.

one of the very best Verdi sopranos in the world … a very pleasing souvenir of her artistry in this repertory.