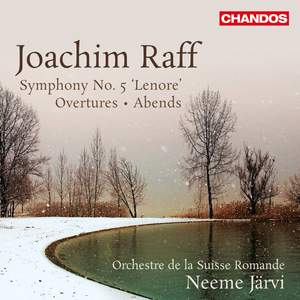 Järvi's performance is an absolutely splendid one - both markedly more propulsive and, to my ears, more excitingly cogent than any other I have encountered, yet with no loss in terms of technical... — Gramophone Magazine, May 2014 More…

This is the second volume in a series from Neeme Järvi and the Orchestre de la Suisse Romande dedicated to the orchestral music of the Swiss-born composer Joachim Raff.

Although he was a highly popular and prolific composer during his day, his works quickly fell out of the repertoire after his death and are largely forgotten today. The idiomatic performances by Neeme Järvi and his Swiss orchestra in Volume 1, described as ‘peerless’ by BBC Music (*****), suggest that they are the perfect performers to reinvigorate interest in Raff’s music.

This second volume features the rhapsody, Abends, and a number of overtures and preludes alongside Symphony No. 5. Subtitled Lenore, the fifth is one of Raff’s so-called programme symphonies, the only one based on a precise extra-musical source: Gottfried August Bürger’s poetic ballad of the same name. The shorter works show very different sides of Raff’s compositional personality. The grandiose Overture to König Alfred reflects the heroic/romantic nature of the opera’s story while the overtures to the comic operas Dame Kobold and Die Eifersüchtigen are full of humour and high spirits. Dornröschen is an oratorio based on the famous story of Briar Rose, or The Sleeping Beauty, by the brothers Grimm and its prelude has been recorded here.

Järvi's performance is an absolutely splendid one - both markedly more propulsive and, to my ears, more excitingly cogent than any other I have encountered, yet with no loss in terms of technical sophistication or affectionate glow...Collectors with a sweet tooth will find this irresistible.

These overtures amplify the qualities embodied in the performance of the symphony. Järvi encourages the Orchestre de la Suisse Romande to give of their very best and, abetted by excellently judged SACD sound, the results are biting, driving, refined and brilliantly exciting.

The prolific Raff is worth reviving, to judge by the inventive, vividly scored descriptive symphony on Bürger’s ballad Lenore, and one or two operatic overtures, included here and performed with great conviction by Järvi and co.