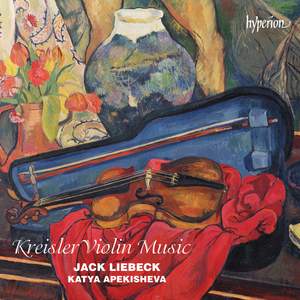 In contrast to the concert-hall projection of Perlman, Liebeck plays these timeless miniatures with a salonesque intimacy and glowing cantabile to rival even the composer. — BBC Music Magazine, August 2014, 5 out of 5 stars More…

Hyperion is delighted to welcome award-winning violinist Jack Liebeck to the label, together with his frequent collaborator, Katya Apekisheva.

Liebeck presents a selection of music by ‘revolutionary player and the epitome of the Viennese violinist’, Fritz Kreisler. Some of Kreisler’s works have a dubious genesis. He programmed his own pieces in recitals; but in about 1905 he started passing some off as works by composers of the past, even writing a ‘Vivaldi’ concerto. He continued this practice. In 1934 he instructed his American publisher, Carl Fischer, to list his so-called ‘Classical Manuscripts’ as his own compositions in the 1935 catalogue; but this change was pre-empted when the New York Times critic, Olin Downes, was asked to give a lecture-recital with Yehudi Menuhin and started investigating the origins of the Praeludium and Allegro. Kreisler admitted it was his own work and his deception made front-page news worldwide. The Praeludium and Allegro (Classical Manuscript No 5, attributed to Gaetano Pugnani) is Kreisler’s finest achievement. When playing it at the Paris Opéra in 1923, Kreisler saw Vincent d’Indy wag a finger at him from the front row and thought he had been found out. Afterwards d’Indy told him: ‘Pugnani would not have played the Allegro in that tempo.’

This selection includes Kreisler’s absurdly virtuosic arrangement of ‘The Devil’s Trill’ by Tartini: Kreisler’s edition, incorporating a realization of the figured bass as well as fingerings and phrasings, provides a fearsome cadenza involving triple- and quadruple-stopping as well as two- and three-note trills.

In contrast to the concert-hall projection of Perlman, Liebeck plays these timeless miniatures with a salonesque intimacy and glowing cantabile to rival even the composer.

Liebeck is a fine player - no doubt about that - with a firm tone and rock-solid technique. The 1785 'Ex-Wilhelmj' Guadagnini he plays fills St George's, Bristol, with commanding ease...Apekisheva is an alert and most sensitive accompanist, sticking to her partner like a limpet.

An hour in the company of Messrs. Liebeck and Kreisler is very definitely time well spent, and it struck me as I listened that in a sense the relationship between Liebeck’s playing and Kreisler’s interpretations is a nice reflection of that between Kreisler and his ‘Old Masters’: underpinned by an obvious affection and understanding of the earlier style, yet always infused with freshness and individuality.

these are so refreshingly bright and zestful they feel like new pieces...perhaps the most impressive performance in the entire collection is the conquering of Kreisler's adaptation of Tartini's Devil's Trill sonata, which surrenders completely to Liebeck and Katya Apekisheva's formidable technique.