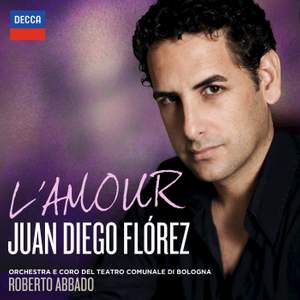 the voice, despite having recently bulked out a little, essentially remains a bright, light (and sometimes a little tight) lyric intrument, famously flexible and free at the top but still with... — Gramophone Magazine, June 2014 More…

Marking a departure for the Peruvian bel canto superstar, this new recording offers a personal survey of the French operatic repertoire from Donizetti to the romantic outpourings of Gounod and Massenet, including Massenet’s ‘Pourquoi me Reveiller’ from Werther.

This is a disc that not only plays to Flórez’s strengths – virtuosic and high-lying – but also shows a new side to the popular singer, featuring repertoire which he has rarely sung on stage

The first solo album in four years by one of the classical world’s biggest stars reveals a voice which has become richer, rounder and more mellow; the choice of repertoire draws further new colours from this ever-stylish tenor.

the voice, despite having recently bulked out a little, essentially remains a bright, light (and sometimes a little tight) lyric intrument, famously flexible and free at the top but still with a somewhat limited timbral range...As such, the more wistful, gentle numbers...struck me as the most enjoyable.

his singing of these great French tenor roles recalls the tenore di grazia style of the great Tito Schipa...As Florez begins to tackle such romantic parts on stage, he will find more light and shade, and a more generous use of voix mixte (a blend of chest and head voice), but the results are exciting here.

Throughout, Flórez is in glowing voice, his clarity and precision of technique as impeccable as ever. In the past, he has occasionally seemed like a relentlessly efficient vocal machine; here, however, he paints enough subtlety of shading and mood to leave such criticism unjustified – evidence of a true artist as well as a star performer.

The brilliant tone and breath control remain; but Flórez is human after all, and he’s been singing his lungs out round the world for more than 15 years. All he needed, perhaps, was a few extra retakes...everything is beguiling, dressed in succulent accompaniments from Roberto Abbado and the Teatro Comunale di Bologna orchestra. You just have to watch for the voice’s quirks.

no one could deny that Flórez has a remarkable instrument and he surmounts all of the vocal hurdles with ease as one would expect...his voice is getting slightly richer, almost darker, without losing its flexibility or range. So far so good; but it doesn’t sound very stylish or as though he’s overly enjoying himself here.