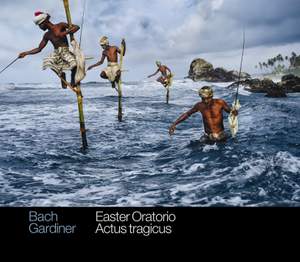 For all the Pascal jubilation of the Oratorio, it's the simple, unaffected solace of the Actus Tragicus, however, that steals the show...Gardiner slims down his forces from the 23 voices of the... — BBC Music Magazine, June 2014, 4 out of 5 stars More…

This album follows the acclaimed release of the Ascension Oratorio. It features soloists Hannah Morrison (soprano), Meg Bragle (mezzo), Nicholas Mulroy (tenor), Peter Harvey (bass). The Easter Oratorio, one of the less performed of Bach’s choral works, was first composed as a simple cantata and later revised to become a more polished piece with a meditative emphasis.

Actus tragicus, composed for a funeral, has an unusually soft toned instrumentation (recorders, viola da gamba and organ) which make it sound both consoling and full of optimism.

The album is packaged in our usual casebook packaging and contains a 28 pages booklet with notes by John Eliot Gardiner and texts in German, English and French.

In March 2014, the Monteverdi Choir will be celebrating its 50th Anniversary.

For all the Pascal jubilation of the Oratorio, it's the simple, unaffected solace of the Actus Tragicus, however, that steals the show...Gardiner slims down his forces from the 23 voices of the Oratorio down to a dozen. His tempos are beautifully interrelated so that everything leads to (and from) the central pause that consigns the mystery of death to utter silence.

[In Actus Tragicus] Gardiner toys delectably with Bach's meticulously textured dissonances...The Easter Oratorio could not provide a greater contrast...There is the customary razzle and dazzle from the virtuoso Monteverdi Choir and English Baroque Soloists...Gardiner is clearly convinced of its merits and therefore you'll find no greater advocate.

What an exuberant, rich and dancing paean of praise and thanksgiving this is in the hands of Gardiner and his musicians...This is an outstanding addition to Gardiner’s Bach discography.

Gardiner has a judicious sense of the pulse of this music, and his singers and instrumentalists draw their colouring, phrasing and textural inflections from the music’s natural contours and expressive implications.