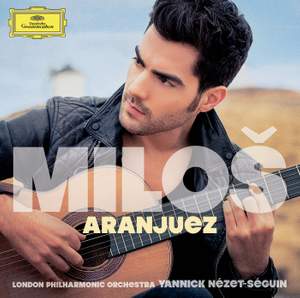 Miloš Karadaglić has a feather-light touch, honeyed tone and warm bass. Musical details are well thought through, and - like a good pianist pedalling - he knows when, and how long, to let notes... — BBC Music Magazine, June 2014, 5 out of 5 stars More… 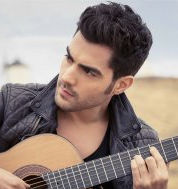 For his third album on Mercury Classics/Deutsche Grammophon, international chart-topping classical guitarist Miloš Karadaglić takes the world-famous Concierto de Aranjuez as the starting point for a journey across the Spanish landscape, paying tribute to the great composers and musicians who placed the modern classical guitar firmly on the international stage.

The Concierto de Aranjuez was written by Joaquín Rodrigo for the Spanish guitarist Regino Sainz de la Maza and very soon became not just the most famous Spanish guitar concerto but also the most famous guitar concerto of all time; its ravishing slow movement was taken up and arranged by musicians of all genres, from Miles Davis, Chick Corea, Jim Hall to Herb Alpert, from Frank Sinatra to José Carreras. And now, Miloš has produced a standalone new interpretation of Aranjuez; the definitive version for our time.

Miloš sees the work as “the holy grail of the guitar repertoire and an endless source of inspiration. The first and last movements sparkle with energy and rhythm. They paint the landscape of nature, happiness and love. The legendary second movement takes us to a different reality, where emotions overflow and a string becomes a voice.”

For the recording of the new album Aranjuez, Miloš was joined by the London Philharmonic Orchestra under the baton of Yannick Nézet-Séguin at the world-famous Abbey Road Studios in London. Miloš recalls that “Yannick’s energy is infectious and our collaboration was the most electric experience. When we met before the recording sessions to run through the music together, he taught me things I shall always be grateful for. For example, he asked me to rethink my approach to Rodrigo’s notorious scale passages. He suggested that, instead of focusing on each note, I should think of them as gestures – taking each one in a different direction as if they were brushstrokes. At that moment I relaxed completely; I had found the final piece of a puzzle, a piece I had been looking for all along.”

Aranjuez is a celebration of the most popular Spanish works for guitar and orchestra, which includes Rodrigo’s Fantasía para un gentilhombre, and it explores the birth and recognition of the modern guitar in the 20th century. “The guitar as we know it today emerged only at the end of the 19th century, after centuries of various transformations. The Spanish guitar maker Antonio de Torres constructed an instrument larger in size and tone than its predecessors, and that marked the beginning of a new age. The guitar was ready to leave the elegant aristocratic salon for the concert platform…”

For Miloš it has been a long journey from Montenegro, where he was born and at eight started playing the guitar. Now a household name, he has become among his generation one of the most successful champions of his instrument. London, where he now lives, played a decisive role in his career, particularly during his years as a student at the Royal Academy of Music.

Miloš Karadaglić has a feather-light touch, honeyed tone and warm bass. Musical details are well thought through, and - like a good pianist pedalling - he knows when, and how long, to let notes and chords ring on for colourful effect...this is a thoroughly recommendable beautiful disc.

The young guitarist comes across as an interpreter of delicacy and meticulousness.

[in the Concerto] Karadaglić opts for clearly defined paragraphs of great rhythmic precision...This is a thoughtful and, I think, durable interpretation that will stand the test of time...it's in Rodrigo's Invocacion y danza that we find Karadaglić at his soloistic and, yes, elegant best.

Fans of Miloš Karadaglić will need no urging to obtain this third album. Others may do so with confidence, even if they have other versions of one or both of the main works.

[Miloš ] demonstrates not only his incredible technique – with effortless sounding runs and trills full of sparkling rhythmic vitality – but also real varieties of colours and musical subtleties. He has a really natural-sounding rubato which is never calculating or forced, but just re-enforces phrasing and subtle harmonic changes...Wonderful playing and a hugely enjoyable disc all round.