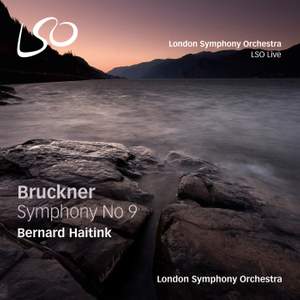 this performance from last year with the London Symphony Orchestra on stupendous form seems to mark a pitch of understanding and communication which it wouldn't be possible to surpass. There... — BBC Music Magazine, April 2014 More…

Bernard Haitink, internationally renowned for his interpretations of Bruckner, returns at the helm of the LSO following his acclaimed recording for the label of the fourth Symphony.

Bruckner’s symphonies are often described as ‘Gothic cathedrals in sound,’ an apt description considering the composer’s devout faith and early vocation as an organist. He died before he could finish his 9th Symphony but within its three movements can be found some of his most complete music, imbued with a sense of deep solace and resolution.

this performance from last year with the London Symphony Orchestra on stupendous form seems to mark a pitch of understanding and communication which it wouldn't be possible to surpass. There are several performances of this work that I take as doing it justice, and this ranks among them.

The manner in which he (Haitink) controls the immense Misterioso is exemplary.

The orchestra are in rapt, highly communicative mode and Haitink builds those Brucknerian layers as only a master can...his steady, forensic approach offers much in terms of grip, detail and architectural strength...A magnificent performance; up there with the very best.

Haitink, as ever, maintains a magisterial grasp on the architectural span of Bruckner’s final “cathedral in sound”. In his 85th year, he is the doyen of the world’s great Brucknerians. His latest interpretation of the Ninth is not to be missed.

[Haitink] holds all in control...The LSO plays with a transparency and poise that cuts through even the most climactic, brass-laden fortissimos. Committed Bruckner lovers will want this in their collection. More tentative fans will be rewarded by the clarity and tautness of this live recording.