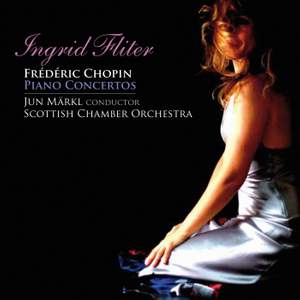 True, she sails perilously close to over-sentimentalising the opening Romanza...but Fliter plays with grace and heartfelt sincerity - abetted by some lovely duetting with the SCO's bassoonist... — Gramophone Magazine, March 2014 More…

Since winning the silver medal at the 2000 Frederic Chopin Competition in Warsaw, Ingrid has built a reputation as a first-rate Chopin interpreter.

Fliter has previously recorded two all-Chopin discs; her interpretation of the complete Chopin Waltzes received several five star reviews and was named as the Telegraph's ‘CD of the Week’ and Classic FM Magazine's ‘Editors Choice’.

Fliter carefully and skilfully showcases the range of tones in Chopin’s second piano concerto, from the dramatic introductory chords at the opening of the first movement to the sweetly lyrical second movement where the Scottish Chamber Orchestra’s woodwinds vie for centre stage. Fliter is a breathtaking performer whose performance of Chopin’s commanding chords and lightening speed runs are effortless.

Ingrid Fliter first sprang to international attention when she was awarded the 2006 Gilmore Artist Award, one of only a handful of pianists to have received this honour.

Ingrid Fliter was also selected as a BBC Radio 3 New Generation Artist from 2007-2009, working with several of the BBC orchestras under the auspices of this programme.

Conductor Jun Märkl is constantly in demand with the world’s leading orchestras and soloists, having studied with Leonard Bernstein and Seiji Ozawa.

True, she sails perilously close to over-sentimentalising the opening Romanza...but Fliter plays with grace and heartfelt sincerity - abetted by some lovely duetting with the SCO's bassoonist - that...I was quickly won over...Fliter, by whatever magical means, touches the heart.

With so many first-rate recorded performances of varying vintages and in different price-ranges did we need another recording? Emphatically yes, if it’s as good as this new Linn CD...There’s plenty of bravura and power in the outer movements without any sense of showing off and there’s poetry in the slow movements.

Fliter’s beautifully considered accounts of the two Chopin concertos...reveal a sensibility of rare emotional refinement and high Romantic instincts...She has plenty of delicacy for the bel canto flourishes of the opening movements, and muscle for the bravura of the folk-dance finales. Solid accompaniments, too.

there's nothing small-scale about Fliter's performances. This is very much Chopin playing in the great tradition: rich-toned, generous though never profligate with its rubato, and invested with a vast range of keyboard colour. It's all put together meticulously too

A chamber ensemble of the calibre and responsiveness of the SCO is the ideal medium in which to appreciate the fact that there is a good deal more subtlety of colour and texture to Chopin’s scoring than is generally acknowledged...Then there is Fliter’s playing, and what a pure joy it is. Power, delicacy, refinement and passion are all there in these two concertos.