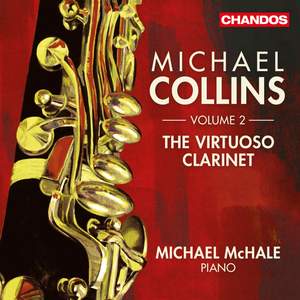 [The Bernstein is] deliciously played by the Collins-McHale duo...This warmly recorded recital continues the good work established by Collins in the earlier volume. — MusicWeb International, 12th May 2014

Chandos exclusive artist Michael Collins here presents the second volume in his series designed to display the extraordinarily wide range of music written for the clarinet. Volume 1 was BBC Music Magazine Editor’s Choice and received IRR Outstanding from International Record Review, which stated: ‘It is difficult to imagine a finer performance than is given here.’ Debussy’s Première Rhapsodie was written as a test piece for the Paris Conservatoire and contrasts long lyrical lines with capricious acrobatics for the clarinet, being described by the composer as ‘hovering between reverie and scherzo’. Pieces by Rabaud and Widor, also written for the Paris Conservatoire, test the abilities of the player with their exuberant displays of virtuosity. A jazz influence is present in other works on the release. The Clarinet Sonata which Bernstein wrote at the start of his career is a vivid testimony to his early promise and his fascination with jazz. Milhaud’s Duo concertant and Martinů’s Sonatina were composed in 1956 and demonstrate a diversity of influence, both combining folk and jazz elements. Each of the four Time Pieces by Muczynski highlights some specific characteristic of the clarinet in terms of range, technical prowess, tone colour, and expressiveness.

[The Bernstein is] deliciously played by the Collins-McHale duo...This warmly recorded recital continues the good work established by Collins in the earlier volume.