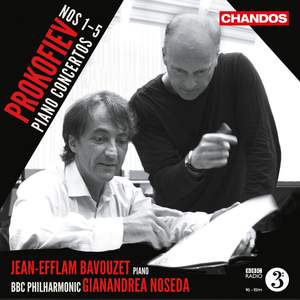 Throughout, Bavouzet displays a light touch and laudable levels of physical stamina, with a firm grasp of the very different personalities of each piece. Noseda and the BBC Philharmonic perform... — Gramophone Magazine, March 2014 More…

Bavouzet’s flair for powerful twentieth-century repertoire was made clear in his recording of Bartok’s Piano Concertos, described by The Telegraph as ‘vibrant in colour, vital in rhythm and detail and viscerally exciting in impact.’ Prokofiev wrote these works between 1911 and 1932, mostly as performing vehicles for himself during his most active period as a pianist of astonishing gifts. The First Concerto is for the most part a youthful jeu d’esprit, full of rhythmical energy, but its brief slow movement is surprisingly tragic. The Second Concerto poses some of the most significant technical challenges in the entire piano repertoire, its vivid and athletic keyboard writing pushing the boundaries of what is playable. The Third Concerto in C major, a bright and breezy vehicle for Prokofiev to showcase his talents as a performer, is today his most popular piano concerto. Numbers 4 and 5 are the least well known, having been written at a time when Prokofiev was pushing his musical language to new extremes. However, both concertos contain slow movements that are full of wistful lyricism, foreshadowing the melodic impulse revealed in later works, such as Romeo and Juliet.

Throughout, Bavouzet displays a light touch and laudable levels of physical stamina, with a firm grasp of the very different personalities of each piece. Noseda and the BBC Philharmonic perform like soulmates for the duration, and with superb notes by the Prokofiev scholar David Nice as part of the deal, you can hardly go wrong.

[Bavouzet] dispatches the bravura passages with élan, yet captures the yearning nostalgia for the Russian émigré’s homeland in his haunting, lyrical slow movements. Gianandrea Noseda and the BBC Phillies are ideal partners in this enterprising set, which should win friends for these less familiar works.