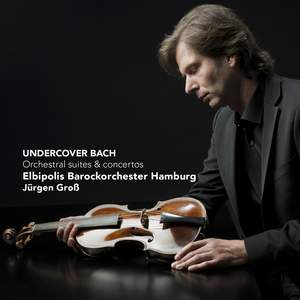 The arrangements have their whimsical percussion or folk effects, but are bracing and fun, and the playing has a lacerating ferocity that won’t please all ears. I found it invigorating. — The Times, 8th February 2014, 3 out of 5 stars

Bach, J S: Overture in A minor for Flute and Strings, BWV822

Bach, J S: Ouverture for Violin and Strings in A Minor, BWV 1067a

‘Undercover Bach’ features the Elbipolis Baroque Orchestra of Hamburg and its director Jurgen Gross performing orchestral arrangements of music by J.S. Bach. The disc includes the Overtures, BWV 820, BWV 822, and BWV 1067a, the Concertos for Strings BWV 571 and BWV anh.152, and the Partita for Harpsichord and Strings BWV 1006.

The tradition of arranging other composers’ works was a convention in the early 18th century. As he grew older J. S. Bach practised this more and more frequently for his own works, and this CD is aligned to that tradition. Five works have been recorded here in orchestral arrangements specially created by Jörg Jacobi. The disc also includes the presumed original version of the Overture in B Minor (BWV 1067), in a reconstruction by Werner Breig.

The Elbipolis Baroque Orchestra of Hamburg was established in 1999, and since then has received invitations to the Cologne Philharmonie and NDR Hamburg’s “Das Alte Werk”, and to several festivals including the Schleswig Holstein Musik Festival and the Bachfest Leipzig. Since 2008 the orchestra has accompanied the Schleswig-Holstein-Musikfestival Choir under the direction of Rolf Beck, as well as the NDR Choir under the direction of Philipp Ahmann. In 2011 the group released its first CD for Challenge Classics (CC72531), of music by the early 18th century Dutch composer Johann Christian Schieferdecker.

The arrangements have their whimsical percussion or folk effects, but are bracing and fun, and the playing has a lacerating ferocity that won’t please all ears. I found it invigorating.