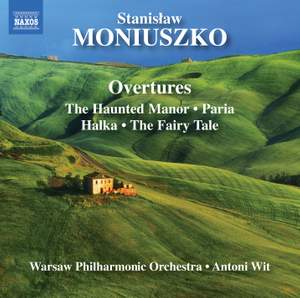 Stanisław Moniuszko was Poland’s leading opera composer in the 19th century, and his work has been said to bridge the gap between Chopin and Szymanowski. His skill as a born melodist is apparent in the beautiful and inspired overture to Paria, while the dramatic Halka was the work which brought him national acclaim. An affinity with Liszt’s tone poems can be heard in the substantial overture Bajka, while the scene for The Haunted Manor is set with its atmospheric Intrada.

the ten very effectively orchestrated compositions on this disc - all composed within the span of a couple of decades - are, in general, tuneful and attractive.