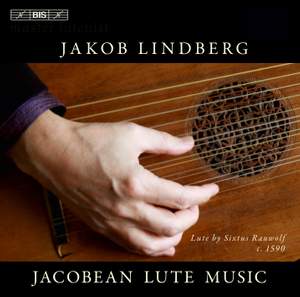 The sound of Jakob Lindberg's lute, made by Sixtus Rauwolf in the last decade of the 16th century, is unusually warm...It a meticulously voiced recital that moves between court, theatre and tavern...Lindberg... — BBC Music Magazine, April 2014, 5 out of 5 stars More…

Robinson, T: The Schoole of Musicke

Walking in a country town

The Schoole of Musicke

From the reign of Henry VIII and onwards, the lute and its practitioners enjoyed the patronage of the very highest English society. Henry played the lute himself, as did his daughter Elizabeth I, who during one period employed as many as five lutenists at her court. In 1603, when she was succeeded on the throne by James I, the tradition was maintained: with his appointment of John Dowland the king increased the number of royal lutenists, while his queen, Anne of Denmark, played the lute herself. This royal enthusiasm for the lute influenced the aristocracy, and an English style of lute music was established. A large corpus of solo music has been preserved, mostly in manuscript sources, from which Jakob Lindberg has made a personal selection. This includes obvious candidates – such as John Dowland and Robert Johnson – but also pieces by the enigmatic Cuthbert Hely, whose work only survives in one single lute book, and by a certain ‘Gauthier' – possibly Jacques Gaultier, who had fled to England after killing an adversary in a duel. The inclusion of this French lutenist also serves to highlight the abundance of French lute music in Jacobean sources, especially, as heard here, in the form of courantes. Another favourite genre in many lute books are settings, often anonymous, of Scottish folk music, and this is also reflected in Lindberg's selection. One of the foremost exponents of the lute and this repertoire, Jakob Lindberg performs the programme on what is possibly the world's oldest lute in playing condition, built in c. 1590 – and thus almost exactly contemporary with the music on this disc.

The sound of Jakob Lindberg's lute, made by Sixtus Rauwolf in the last decade of the 16th century, is unusually warm...It a meticulously voiced recital that moves between court, theatre and tavern...Lindberg conjures an age that was as perilous as it was rich in musical invention.

the lute music from this period represents some of the best ever written for the instrument...Under Lindberg's fingers, and on his beloved Sixtus Rauwolf lute (c1590), even the relatively straightforward anonymous Scottish pieces included here are imbued with the same affecting lyricism he lavishes on the [named] works.