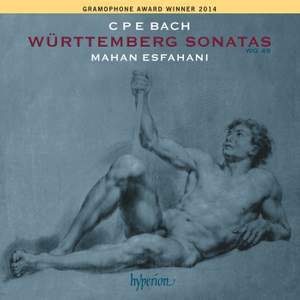 Esfahani's at his most expressive in the slow movements...This, his first solo disc, provides a particularly welcome introduction onto the world stage for an artist matching, in expression CPE... — BBC Music Magazine, February 2014, More…

Hyperion is delighted to present the debut recording of the wonderful young harpsichordist Mahan Esfahani. He was the first harpsichordist to be named a BBC New Generation Artist or to be awarded a fellowship prize by the Borletti-Buitoni Trust.

Here Mahan Esfahani has recorded CPE Bach’s six ‘Württemberg’ sonatas, which were written in 1742–3 and published in 1744, and his thrillingly intense performances make the best possible case for this dramatic, beautifully written, endlessly imaginative but for some reason under-performed music. The sonatas range stylistically from initial stirrings of Sturm und Drang in keyboard music to sublime imitations of the human voice, with nods to the High Baroque and the idiom of CPE Bach’s more famous father. Mahan writes in his booklet notes that ‘Carl Philipp Emanuel Bach makes the most combative statement possible to assert his new musical language’.

Esfahani's at his most expressive in the slow movements...This, his first solo disc, provides a particularly welcome introduction onto the world stage for an artist matching, in expression CPE Bach himself.

Esfahani’s booklet-note provides the listener with a convivial commentary in which he draws attention to CPE Bach’s ‘Janus-like musical personality’...The elusive fusion of thematic intricacy, ‘Baroque’ rhetoric and ‘proto-Classical’ Sturm und Drang offered by the instrument are caught perfectly by Esfahani’s supple touch and disarming sense of rhetorical pacing.

Esfahani makes coherence out of apparent incoherence...As for his playing, in the best sense it is anything but unpredictable: sure-minded and vividly realized, it holds the attention with ease and is a pleasure to hear. This is an excellent recording and it can be thoroughly recommended.

The sound of his instrument...enjoys a wide-ranging spectrum of timbres in Esfahani’s dexterous hands, but it is the verve of his allegros and the affecting pathos of his slow movements that mark him out as a special interpreter of this fascinating composer’s music in his tercentenary year.

Esfahani's performances wonderfully convey the sense of the younger Bach flexing his muscles in the new musical language that he was involved in creating.... there's an almost fortepiano-like solidity to the sound, with crisp definition in both the high and low registers that matches its expressive ambitions perfectly.