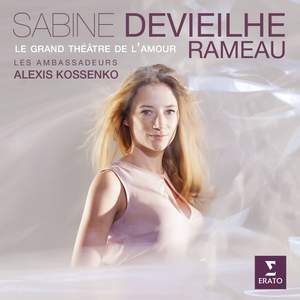 Devieilhe has a clear, flexible voice with easy high notes. She's an agile, expressive and stylish singer, and a generous team-player...The star performance here, however, comes from Kossenko... — BBC Music Magazine, May 2014, 5 out of 5 stars More…

Sabine Devieilhe, the young French lyric-coloratura soprano is a name to watch. Over the 2013-14 Paris season she will star in Delibes’ Lakmé at the Opéra Comique and make her debut at the Opéra as the dazzling Queen of the Night in Die Zauberflöte. She has been described as a singer “whose upper register, like her virtuosity, appears limitless, while her verbal sense and dramatic engagement are breathtaking”. Both her achievement and her potential were recognised at the 2013 Victoires de la Musique Classique, France’s equivalent of the Grammys, where she won the award in the category for ‘Révélation artiste lyrique’.

In 2012 she appeared at the Aix-en-Provence Festival, in Mozart’s La finta giardiniera, and triumphed as Lakmé in Montpellier. Her plans also include the Queen of the Night and Constance in Poulenc’s Dialogues des Carmélites at the Opéra de Lyon, and, further in the future, Bellini’s La sonnambula (which she has already sung in concert), Adele in Johann Strauss’ Die Fledermaus and Nannetta in Verdi’s Falstaff.

Sabine Devieilhe studied cello and musicology and sang in the chorus of the Opéra de Rennes before she entered the Paris Conservatoire, where in 2011 she received First Prize. She has performed with a number of important ensembles, particularly in the field of historically informed performance; these include Les Musiciens du Louvre under Marc Minkowski, Pygmalion under Raphaël Pichon, Les Cris de Paris under Geoffroy Jourdain, L’Atelier Lyrique de Tourcoing under Jean-Claude Malgoire and Les Ambassadeurs under Alexis Kossenko, with whom she has recorded this new album of Rameau.

Conductor and flautist Alexis Kossenko was born in Nice and the international line-up of musicians in Les Ambassadeurs is the realisation of a dream inspired by the eclectic Dresden Hofkapelle of Bach’s time: to bring together period instruments to perform a broad repertoire, ranging from Bach, Rameau and Handel through Mozart and Rossini to Stravinsky and Debussy.

Devieilhe has a clear, flexible voice with easy high notes. She's an agile, expressive and stylish singer, and a generous team-player...The star performance here, however, comes from Kossenko and his orchestra...Delightful from start to finish, with animated contributions from Le Jeune Choeur de Paris, this is a stunning debut disc.

Devieilhe gets everything right, with excellent support from Les Ambassadeurs.

I have little but praise for a captivating disc which reveals Rameau in all his varied and colourful finery. Devieilhe has a light and airy voice and an athletic technique with which to do justice to the composer's many technical demands...A winner!

This disc not only demonstrates the versatility of Rameau, but also that of Sabine Devieilhe...It is a bit unfair to talk about highlights, because this disc as a whole is excellent.

The chief pleasures here are the outstanding contributions of Alexis Kossenko’s period band...Devieilhe’s metallic baroque soubrette...turns shrill and wobbly under pressure. Still, she understands the style, and is characterful in her cackling of La Folie’s coloratura, from Platée.

Devieilhe’s voice is beautifully clear and full, cultured but young and natural, lyrical and agile...a creation of shapely musicianship, constantly engaged with the words. Likewise the accompaniments by Les Ambassadeurs, led by Alexis Kossenko, are lively, engaged, thought-out and beautifully balanced.