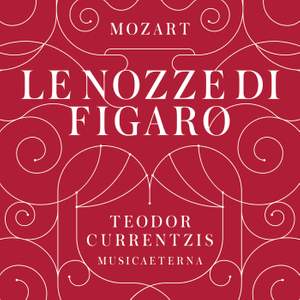 Currentzis’s cast has a character and blend of its own. A premium has been put on crackling recitative, deft vocalisation (limited vibrato) and dramatic truthfulness: the sense of ensemble is... — Financial Times, 14th February 2014, 5 out of 5 stars More…

Sony Classical announces a major new Mozart opera project with conductor Teodor Currentzis and his orchestra & choir MusicAeterna. A ‘no-compromise’ studio recording cycle of Mozart’s three Da Ponte operas. Living in a unique artistic community established on the edge of Siberia, the musicians work and record under ideal conditions towards Currentzis’ stated goal “to show what can be achieved if you avoid the factory approach of the classical music mainstream”.

For Currentzis, these recordings represent the culmination of a decade-long research project dedicated to the discrepancies between the composer’s will and what our ears have become used to. About his Figaro, he says: “The radicality of this recording is its precision. It is through strictest discipline that you unlock the perfume, bring the composer’s text into real life, create all these colours that are impossible on the stage. This is why we spent such a significant amount of time in the studio – because we were pushing to reach our limits, to jump above our limit and reach a new understanding of this music. That is the privilege of a ‘no-compromise’ studio recording. There are so many recordings which convey the general spirit of Mozart’s music. The only point in making a new one is to give the audience a chance to hear and learn about all the magic which this score holds. I made this recording because I wanted to show what can be achieved if you avoid the factory approach of the classical music mainstream. My credo is that every performance you give has to be like a pregnancy. You have to dream and you have to wait until the time comes when you see the miracle happening. If you’re not like that in music, you lose the central idea of music. Music is not a profession and it’s not about reproduction. It’s a mission”.

Currentzis chooses the orchestra’s instruments depending on repertoire. For the Da Ponte cycle, historic instruments were chosen because, as Currentzis explains: “They give me the vibrancy, the speed, the taut, tight, crisp sound which fully delivers the thrill of this music. I use them because they sound better. If I thought this music sounds better on electric guitars, I would perform it on electric guitars”. The soloists’ vocal technique is also markedly different to modern operatic interpretation, with a focus on intimacy and clarity, a use of vibrato remarkably restrictive even by today’s ‘period practice’ standards as well as an approach to melodic ornamentation derived from historic sources which cannot be heard in other performances of these works.

Currentzis’s cast has a character and blend of its own. A premium has been put on crackling recitative, deft vocalisation (limited vibrato) and dramatic truthfulness: the sense of ensemble is palpable. The field of Figaro recordings is crowded, but Currentzis’s deserves a special space.

a lively performance, decently sung and conducted. Currentzis is much concerned with dynamic contrast...'Dove sono' is a true soliloquy. Most effective of all is the Sextet, where all the characters...sound appropriately stunned...Three cheers for the appoggiaturas, cadenzas and embellishments...What will, I fear, pall on repetition...is the hyperactive continuo.

This Figaro is a cat destined to ruffle Mozartian dovecotes...the real stars are Christian van Horn’s darkly handsome-sounding Figaro and Andrei Bondarenko’s superb Count...Not for traditionalists, this Figaro is unlike any other on disc. Worth a try for open-minded Mozartians.

sheer beauty of vocal tone, this must be the best recorded Figaro yet...we are continually encouraged to listen afresh and discover new wonders in Mozart’s score. It’s a rejuvenating accomplishment

there’s a point to operatic singing beyond mere volume, as Bondarenko shows: depth, expression, colour, character...Christian van Horn is a suave enough Figaro and Malena Ernman sings Cherubino very musically...Under Currentzis’s forthright baton you certainly hear every detail of the orchestration; the sound is preternaturally vivid and clear, if rather tight.