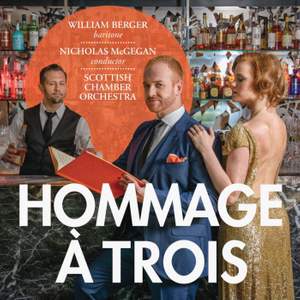 Described by Gramophone Magazine as ‘one of the best of our younger baritones’ William Berger makes his Linn debut with a programme of arias from some of the finest operatic composers.

Soprano Carolyn Sampson guest stars on several duets whilst the Scottish Chamber Orchestra, which has won several awards for its performances of Mozart, provides sterling support throughout.

Following a 2012 performance by Berger, the SCO and McGegan, The Herald commented that Cimarosa’s 1792 cantata Il Maestro di Capello woud be ‘a highlight of [the] upcoming Linn disc this team is making.’

The programme encompasses arias from all of Haydn and Mozart’s best-loved operas; Berger’s stage portrayal of Papageno was praised by The Arts Desk: ‘Berger is also a deft, musicianly baritone, and a communicator who has the audience eating out of his hand.’

Berger’s debut album was chosen by Guardian critics as one of the ‘Best Classical Albums of 2012’ and by David Mellor as his ‘Album of the Week’ on Classic FM.

William Berger’s warm, rich baritone and charismatic stage presence have been winning praise from audiences and critics alike. With his intelligent approach to characterisation and thrilling interpretations, he’s a rising young star on both the concert and operatic stage.

A specialist in 17th and 18th century repertoire, William has performed all of the major Mozartian baritone roles as well as a wide selection of roles by Monteverdi, Handel, Haydn, Puccini, Janáček and Weill.

Carolyn Sampson has sung many roles for English National Opera and for Glyndebourne Festival Opera, and has appeared with Opéra de Paris, Opéra de Lille and at the Boston Early Music Festival.

Described as ‘an expert in 18th-century style’ (The New Yorker) Nicholas McGegan is the Grammy nominated director of the Philharmonia Baroque Orchestra; he is active in opera as well as the concert hall and has given several premiere performances of collaborations with choreographer Mark Morris.

It's a discreetly sexy disc, engagingly witty and stylish, and, for the most part, cleverly put together...Haydn's wide-ranging arias show off Berger's coloratura and the beauty of his upper registers to perfection.

Berger might not have the richest of tones, but his voice is true and the top secure. Just as importantly, he is able to use it to build character and his Count, Giovanni, Guglielmo and Pappageno are all deftly differentiated...McGegan conducting is hugely supportive and the Scottish Chamber Orchestra on good form.