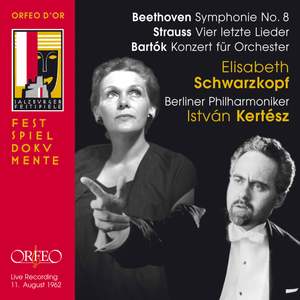 István Kertész’s early death from a swimming accident in 1973, aged just 44, meant that he performed very little in Salzburg. In Salzburg in 1962 he confirmed his reputation, as a first-class conductor of the younger generation, conducting the Berlin Philharmonic in a programme that made evident his stylistic flexibility. This concert, two days after the death of Herman Hesse, the poet of three of the songs, was further enriched by the presence of Elisabeth Schwarzkopf – a Strauss interpreter without peer to the present day.