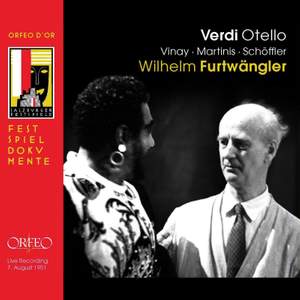 Orfeo are proud to present the only recording of an Italian opera by Wilhelm Furtwängler, with the greatest Otello of his day, from the summer of 1951, on the 50th anniversary of the composer’s death, now in fully restored sound.

It was one of those coups that give a festival its particular appeal. At the helm of the Vienna Philharmonic, Furtwängler succeeded in turning the audience’s surprise into enthusiasm. The thoroughly symphonic conception of this late opera score of Verdi’s was brilliantly transformed by Furtwängler into a kind of “psychological drama” of its title hero, sung by Ramón Vinay, a tireless heldentenor with a rich variety of shadings in his voice. As the scheming Iago, Paul Schöffler’s extraordinarily sophisticated baritone was his equal, just as Dragica Martini, at the beginning of her international career, proved a perfect Desdemona, possessed as she was of a most graceful soprano voice.

Great pains had been taken to cast the production, right down to the less extensive roles (for example, Anton Dermota sang Cassio and Josef Greindl was Lodovico). The result was a performance that is regarded as exemplary to this day.