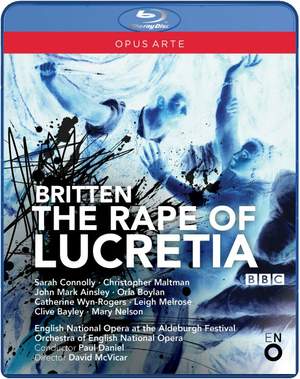 Offer, Britten: The Rape of Lucretia

Sarah Connolly's 'outstanding' (The Guardian) portrayal of the wronged Roman noblewoman, written originally for Kathleen Ferrier, lies at the heart of David McVicar's powerfully stark production for English National Opera as 'an everyday sort of woman who could be living at any time or place.' Her nemesis is the arrogant Tarquinius of Christopher Maltman, 'who made the air tingle with danger' (Financial Times). Filmed by the BBC at Snape Maltings during the production’s premiere run at the 2001 Aldeburgh Festival.

Britten’s “chamber opera” was premiered at Glyndebourne in 1946, representing a stylistic departure from the grander Peter Grimes the previous year.

Based on the legend of Lucretia who is raped by the Roman tyrant Tarquinius but kills herself rather than live with the shame.

McVicar typically finds clarity and purpose amid the opera's convoluted story-telling...Connolly's performance sets a standard that's perhaps as important to The Rape of Lucretia as Jon Vickers was to Peter Grimes. Daniel makes every note count in this ultra-spare score.

Ainsley is superb...Melrose as Junius brilliantly brings out the weakness of character...Bayley's Collatinus is nobe of bearing and deeply touching both vocally and physically...Connolly is quite simply magnificent as Lucretia, taking the audience with her throughout...superbly well sung, played and acted.

[Maltman] gets right into the physicality of the role, projecting himself forward with all the character’s lascivious selfishness...Connolly makes a wonderful Lucretia, too. She is dignified and noble throughout...In many ways the greatest revelations come from the Male and Female chorus, both excellently sung. Add in the expert playing of the ENO chamber ensemble and Paul Daniel’s intelligent conducting, and you have a winner on your hands.

Rather than lavish praise on the whole cast, I would only single out Christopher Maltman’s insecure Tarquinius, rather more than just a thug, and Leigh Melrose (Junius), who uses body language to turn what can seem like a subsidiary role into a major player, the cynical opportunist using human pain for political advantage. Paul Daniel leads a perfectly paced reading with members of the ENO orchestra.