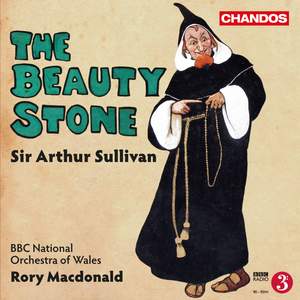 Sullivan, A: The Beauty Stone

Sullivan, A: The Beauty Stone

Act I Scene 1: Recitative and Song: Since it dwelt in that rock whose hallowed crest (Devil)

Act I Scene 1: Appearance of Laine

Act I Scene 1: Change of Scene

Act I Scene 2: Scene: Know ye all, both great and small (Nicholas, Philip)

Act I Scene 2: Scene: I am Barbe of Bovigny (Barbe, Chorus)

Act I Scene 2: Finale: By Our Lady, she is fair! (Philip, Chorus, Nicholas, Saida)

Act I Scene 2: Finale: I can but tell I knelt and prayed (Laine, Philip, Chorus)

Act II Scene 1: Chorus of Knights and Dames: With cards and dice, and with wine and laughter (Chorus)

Act II Scene 1: Chorus of Knights and Dames: Though she should dance (Chorus)

Act II Scene 1: Song: I'll tell them what thou wast when first I knew thee (Guntran)

Act II Scene 1: Nay, wert thou more than all he said thou art (Laine, Philip)

Act II Scene 2: Duet: I would see a maid who dwells in Zolden (Simon, Joan)

Act II Scene 3: Duet: Up and down (Jacqueline, Devil)

Act III Scene 1: Scene: So all is lost for ever! And 'twas thou (Saida, Devil)

Sir Arthur Sullivan is best known for his famous collaboration with W.S. Gilbert, a supreme partnership the fruits of which have tended to overshadow Sullivan’s other musical endeavours. The Beauty Stone falls into this category of neglected works. A serious operatic work of epic duration, it was a surprising flop at its premiere in 1898, a time when Sullivan was at the height of his career. The audience was expecting something more in the mould of the composer’s fleet and nimble comic operas, and was unprepared for a work of such size and seriousness. Subsequently, Sullivan made dramatic edits to the score, removing some of the work’s most delightful music, but in this new recording all of the omitted music has been restored. The strength of the opera is undoubtedly its many fine melodies, superb orchestration, and excellent characterisation, as well as a vivid atmosphere suitably suggestive of the romantic mediaeval setting of the plot. This, the premiere commercial recording of the work is cast with some of the finest singers on the stage today and is conducted by Rory Macdonald, one of Britain’s most talented, dynamic young conductors. This release follows the highly regarded recording of Sullivan’s Ivanhoe.

a deftly woven score, intriguingly cast in several registers...Sullivan's sophisticated add another layer of delight. The recording and presentation are admirable...I wish Toby Spence's epicurean lord had more and stronger material, but a magic stone, as the opera proves, can't work every miracle.

thanks to the discovery of Sullivan’s autograph score, it comes to life in this sparkling recording...The medieval-mystery plot may be hokum, but there are enough scenes of musical depth to justify a reassessment.

Opie revels in his Faustian role...[Thomas's] youthful soprano voice is well focused throughout and her identification with the part is never in doubt...Evans offers a vivid and dramatic profile of Saida...There's some lovely playing from the BBC NOW, particularly in the score's more reflective moments.

[Macdonald's] exacting skill in the handling of pace, dynamics and texture is very much admired. The teasing out of nuances in the score allows the listener to appreciate the reasons why Sullivan is set on a higher plane than many of his contemporaries...A most enjoyable find.

Sullivan’s score is charming, if hardly vintage, and is delivered here with brio by Rory McDonald and leading G&S lights

It has never been recorded by professional singers before, and Rory Macdonald seems to have prepared with academic scrupulousness...it's very strongly cast, too, but there's no sense of an important rediscovery here.