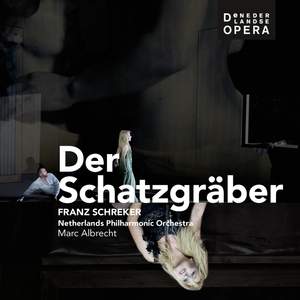 The Netherlands Philharmonic Orchestra make the most of the brief passages of purely orchestral writing and the practised hand of Marc Albrecht ensures as strong a sense of forward motion as... — Gramophone Magazine, March 2014 More…

The early 20th century Austrian composer Franz Schreker is especially known for his operas. Der Schatzgräber (The Treasure Hunter) was completed in 1918 and premiered Frankfurt in 1920. On this recording, the second in a Netherlands Opera series on Challenge Classics, the Netherlands Philharmonic and the Netherlands Opera Chorus are conducted by Marc Albrecht. The cast includes Tijl Faveyts, Raymond Very, and Kay Stiefermann.

Franz Schreker wrote the libretto and composed the music to Der Schatzgräber following the great success of his previous two operas Der ferne Klang and Die Gezeichneten. After it was premiered in Frankfurt in 1920, productions took place in major cities across Europe.

Looking back to Wagner, while embracing the fashions and forms of his own time, Schreker pondered what an artist should offer to modern society. In Der Schatzgräber that crisis of conscience finds voice in mystic medievalism. The opera’s plot centres around a queen who has lost her jewels, and with them her beauty and fertility. The court fool knows about a wandering minstrel called Elis whose magic lute points out all hidden treasures to him. The king promises the fool that he will be allowed to choose a wife as a reward, if Elis can find the jewels.

Marc Albrecht has been the chief conductor of the Netherlands Philharmonic and Netherlands Chamber Orchestra since the 2011-2012 season. He is particularly known for his interpretations of works by Wagner and Richard Strauss, and of contemporary music.

His critically-acclaimed live recording of Strauss’ Elektra with the Netherlands Philharmonic (CC72565) was released on Challenge Classics in 2012.

The Netherlands Philharmonic Orchestra make the most of the brief passages of purely orchestral writing and the practised hand of Marc Albrecht ensures as strong a sense of forward motion as this kind of harmonic idiom permits.

The cast is very strong in the key roles, with Tijl Faveyts authoritative as the King, and Manuele Uhl suitably dramatic as Els. Mattijs van de Woerd has avuncular warmth as the innkeeper...this is one of those operas and recordings which ‘has it all’, from the drama and sublime beauty of the music to the glorious performance and sumptuous recording.