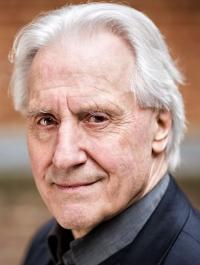 Born in Lancashire in 1941, Graham Clark is renowned for his portrayals of dramatic character tenor roles, particularly Wagner’s Mime and Loge; his repertoire also includes Aegisth in Strauss’s Elektra, Valzacchi in his Der Rosenkavalier, The Witch in Humperdinck’s Hänsel und Gretel, Britten’s Captain Vere (Billy Budd) and The Captain in Berg’s Wozzeck.

Clark initially trained as a PE teacher and worked for the Sports Council before switching to singing in the mid-1970s; early engagements included contracts with Scottish Opera and English National Opera (for whom he was a company principal from 1978-85). Clark made his Metropolitan Opera debut as Steva in Janáček’s Jenůfa in 1985, and sang regularly at the house for several decades, creating the role of Bégearss in John Corigliano’s The Ghosts of Versailles and singing Albert Gregor in the house premiere of Janáček’s The Makropoulos Case. He was also a regular at the Bayreuth Festival throughout the 1980s, notching up over 100 performances; he appears as Loge in Daniel Barenboim and Harry Kupfer’s 1992 Ring Cycle, as David in Horst Stein and Wolfgang Wagner’s Die Meistersinger, and as the Steuermann in Woldemar Nelsson and Harry Kupfer’s Der fliegende Höllander (all available on DVD).

Awards include the 1986 Olivier Award for Outstanding Achievement in Opera, and an honorary doctorate from Loughborough University, where he studied in the 1960s.

Find out more at https://en.wikipedia.org/wiki/Graham_Clark_(tenor)