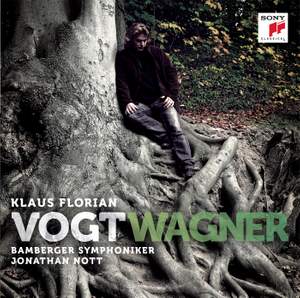 On this disc, he sings things he would never perform in the theatre, his obvious characteristic being an ethereal quality ideally suited to Lohengrin. It casts new light on Walther in Meistersinger... — BBC Music Magazine, June 2013, 4 out of 5 stars More…

Fanget an! So rief der Lenz in den Wald

Am stillen Herd in Winterszeit

The album presents arias from the Wagner operas Mr Vogt has sung at famous opera houses around the world, including ‘Die Meistersinger von Nürnberg’, ‘Lohengrin’ (being his breakthrough success and most famous role at the Bayreuth Wagner festival), ‘Parsifal’ (new production at the Deutsche Oper Berlin 2012), ‘Walküre’ (new production of the ‘Ring des Nibelungen’ at the Bayerische Staatsoper in Munich).

The CD also includes roles Vogt has not sung before on stage, such as ‘Rienzi’ and ‘Tristan and Isolde’. Vogt is accompanied here by the acclaimed Finnish soprano Camilla Nylund and the Bamberg Symphony Orchestra under the baton of Jonathan Nott.

Klaus Florian Vogt sings in all major opera houses around the world. In 2013, he will star in a new production in Milan (‘The Flying Dutchman’) and will also perform at the opera houses in Barcelona (‘Rusalka’), Tokyo (‘The Mastersingers of Nuremberg’), Berlin (‘Lohengrin’), Munich (‘The Flying Dutchman’ & ‘Lohengrin’), Hamburg (‘The Mastersingers of Nuremberg’) and Helsinki (‘The Dead City’). He will also be on stage in Bayreuth in 2013.

Mr Vogt received the prestigious German Echo ‘Singer of the Year’ Award in 2012 for the ‘Helden’ CD.

“…the timbre rewards the ear with its clarity, youthfulness and affecting sweetness” International Record Review on ‘Helden’

On this disc, he sings things he would never perform in the theatre, his obvious characteristic being an ethereal quality ideally suited to Lohengrin. It casts new light on Walther in Meistersinger and on Parsifal, though there his resources are stretched to the limit...Jonathan Nott seems to be a remarkable Wagner conductor.

There is no lack of intelligence, sensitivity or preparation but of the requisite tessitura and sound quality...But the successes, where Vogt's voice works well with the music, are genuine...[in Lohengrin's farewell] Vogt is able to harness the (apt) wide-eyed innocence of his vocal delivery...to the dramatic situation.

In the prayer from Rienzi Vogt is very good indeed, with the flexibility to manoeuvre his way around the sometimes delicate filigree of the vocal writing...Nott faithfully follows the dictates of the music in these small-scale performances, and the orchestra plays well for him

though possessing an undoubted princely nobility and boyish enthusiasm well suited to the younger roles, Vogt sounds thin and strained in places...his performance seems most effective when allied to the foil of Camilla Nylund's soprano

Vogt’s Lohengrin and Parsifal are beautifully judged and performed, and possess true radiance; Rienzi and Erik provide almost bel canto pleasure too. Siegmund and Tristan reveal a certain lack of baritonal richness normally heard in these roles, yet are well matched by Camilla Nylund’s relatively light soprano as Sieglinde and Isolde.