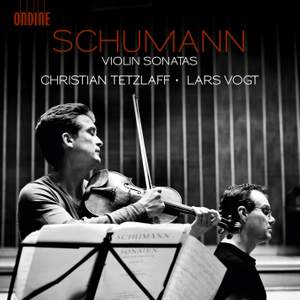 Schumann: Sonatas for Violin and Piano

There's no doubting the rewarding partnership of Christian Tetzlaff and Lars Vogt in this admirable account. Their partnership is equal throughout...There is exemplary tenderness, tempered at... — BBC Music Magazine, February 2014, 4 out of 5 stars More…

In this selection of Sonatas the artists reveal Schumann’s development as a composer; this recording includes the third Sonata which was neglected for a century after Schumann’s death, only premiering in 1956.

Named Instrumentalist of the Year in 2005 by Musical America, Christian Telzlaff has long been considered a top international violinist. His recording of the Mendelssohn and Schumann violin concertos released with Ondine in 2011 (ODE11952) received the Preis der deutschen Schallplattenkritik (German Records Critics Association).

Lars Vogt was appointed the first ever ‘Pianist in Residence’ by the Berlin Philharmonic in 2003/4 and enjoys a high profile as a soloist and chamber musician.

Ondine’s earlier release with Tetzlaff and Vogt, Mozart’s Sonatas for Violin and Piano, was recieved with great critical acclaim, winning Gramophone’s ‘Editors Choice’ and ‘Recording of the Month’ as well as the ‘Chamber Choice’ in BBC Music Magazine.

There's no doubting the rewarding partnership of Christian Tetzlaff and Lars Vogt in this admirable account. Their partnership is equal throughout...There is exemplary tenderness, tempered at all times by good sense, even if sometimes head seems to dominate heart.