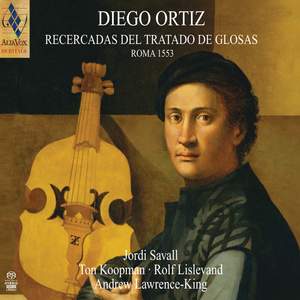 Published in Rome in 1553 and re-discovered during the 20th-Century, the 'Tratado de Glosas' by Spanish composer Diego Ortiz offers, through many variations called 'recercadas', an unmatched panorama of the instrumental music of its time.

The reissue of this 1990 album in the Heritage series enables us to listen to one of Jordi Savall’s best accomplishments, alongside Ton Koopman and Rolf Lislevand. On various themes, including 'La Folia' and 'Doulce memoire', Diego Ortiz and Jordi Savall demonstrate their science and their spirit of invention for our greatest entertainment!

Savall plays this music with unmatchable sympathy, his accompanists with great freedom and equivalent brilliance, and it is spell-binding- a masterly recording, essential in any collection

Whether for the short, four-part suite for solo gamba or the lithe but weighty dances of the final ‘Recercadas sobre tenores’ the music of Tratado de Glosas is both lyrical and melodically imaginative… A fine album