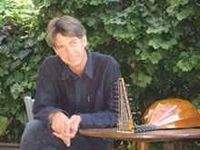 Rolf Lislevand was born in 1961 in Oslo. From 1980 until 1984, he studied the classical guitar at the Norwegian State Academy of Music. In 1984, he entered the Schola Cantorum Basiliensis in Switzerland, which was then the most active early music centre in Europe. He studied there until 1987, under the guidance of Hopkinson Smith and Eugène Dombois. He was then asked by Jordi Savall to accompany him with groups such as Hespèrion XX, La Capella Reial de Catalunya and the Concert des Nations. Through Savall, he acquired first-hand knowledge of 17th century French viola da gamba music, just as Montserrat Figueras introduced him to 16th and 17th century Spanish vocal music.