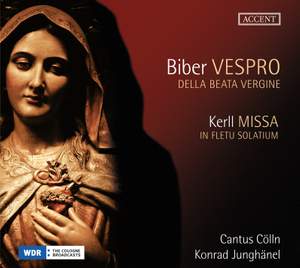 a magnificent monster it is… grand in every sense- the criss-crossing chromatic scales in the Amen of both the Gloria and the Credo are especially striking...the singing is fabulous and the instrumental... — Early Music Review, October 2013 More…

Johann Caspar Kerll’s 'Missa in fletu solatium' must have been composed in connection with the festivities following victory at the great Battle at Kahlenberg, from which the imperial army emerged victorious over the Ottoman army under the leadership of Grand Vezier Kara Mustafa Pasha. Kerll lost his first wife during the plague epidemic and had to witness the dwindling numbers of his colleagues in the court orchestra. Immediately after this, he witnessed the horrific Turkish siege. Both events must have shaken him to his very foundations. This is, in any case, conveyed by the sounds of his Mass, which reveals astonishing compositional artistry; its gloomily imploring tone allows us to sense but little of the relief over the happy outcome of the siege. Instead of exuberant, unrestrained jubilation, we experience in this music, once more, the tortures and fears of the maltreated Viennese population.

In 1693, the year of the death of Johann Caspar Kerll, Biber published an extensive collection of psalm settings entitled 'Vesperae Longiores ac Breviores', intended to provide music for Vesper services. In the present recording, the six-part cycle of 'Psalmi de B. M. Virgine' has been expanded into a small Vesper of St. Mary. In accordance with the liturgical customs of the time, brief sonatas and solo motets are performed in place of the introductory antiphons.

The sonata introducing the Magnificat is from Biber’s 1683 collection 'Fidicinium sacro-profanum' printed in 1683, whereas the motets assigned to the remaining psalms are taken from Kerll’s first opus, the 'Delectus sacrarum cantionum' published in Munich in 1669.

Founded by Konrad Junghänel in 1987, Cantus Cölln swiftly became established in the international musical scene. During the 25 years since its formation, the ensemble has received great acclaim for its revitalisation of long-neglected works in the repertoire alongside its groundbreaking interpretations of a number of standard works of the Baroque repertoire, many for harmonia mundi.

a magnificent monster it is… grand in every sense- the criss-crossing chromatic scales in the Amen of both the Gloria and the Credo are especially striking...the singing is fabulous and the instrumental contributions are precise and stylish in equal measure. Don’t miss it!

a performance of rare commitment and intelligence, its detail and inner workings brightly illuminated by music-making of extraordinary intensity. This is, in every way, an outstanding disc.