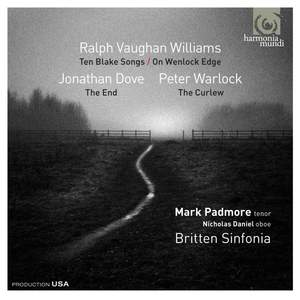 Edge, rather than lyrical elegance, is Mark Padmore's expressive strength, combined with his superb diction...I've never heard [the Blake Songs] come across so convincingly...Lavish praise too... — BBC Music Magazine, December 2013, 4 out of 5 stars More…

I. On Wenlock Edge

II. From far, from eve and morning

III. Is my team ploughing?

IV. Oh, when I was in love with you

VIII. Cruelty has a human heart

III. I cried when the moon

V. I wander by the edge

British composer Jonathan Dove (b. 1959) made the following remarks on the genesis of his new work, 'The End' (2012), with support from the 'Tenner for a Tenor' campaign.

"When I heard Mark Strand read his poem ‘The End’ to a small gathering of artists in Italy a few years ago, I was moved – and also felt immediately that it was a poem that could be sung. I hoped that one day I might have the chance to set it to music. I did not know exactly what the music would sound like, but I imagined a solo voice with several instruments.

Britten Sinfonia gave me the opportunity to make this wish come true, by inviting me to write something for Mark Padmore to sing, with instrumentation to match Warlock’s 'The Curlew'. String quartet with two solo wind instruments seemed the perfect combination to suggest the gentle rocking motion of the ship slipping into darkness, and perhaps hear birds suspended in flight."

Edge, rather than lyrical elegance, is Mark Padmore's expressive strength, combined with his superb diction...I've never heard [the Blake Songs] come across so convincingly...Lavish praise too for the wonderful playing of the Britten Sinfonia...I shall be coming back to this.

Many of Blake’s finest, most condensed verse utterances are here, Innocence and Experience nestling side by side: darkness is ever-present, as we move for instance from the Sunflower- and then to the comforting ‘Divine Image’. Ten Blake Songs is a bleak masterpiece and Padmore and Daniel are exceptional… This fine release earns plaudits on every front

This is an extremely fine disc. Mark Padmore’s singing is technically beyond reproach and his eloquence is telling in all four works on the programme. At every turn he finds superb partners in the members of Britten Sinfonia...this new release is one of the finest discs of English song to have come my way in a long time.

This is a reflective, beautifully delivered recital of English song much concerned with death, its nature well suited to this tenor’s mellifluously lyrical, emotionally intense music-making.