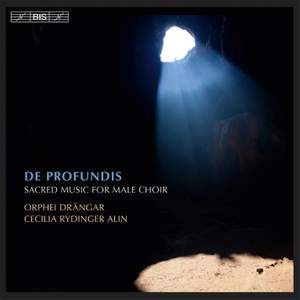 Mainly unfamiliar repertoire, in warmly blended performances by one of Sweden's oldest male-voice choirs. Rossini's Preghiera stands out for its charm and lightness of touch. The sound is plushly... — BBC Music Magazine, December 2013, 4 out of 5 stars More…

Estonia provides both starting point and goal for this disc of sacred music for male choir, with a traditional hymn followed by works by composers such as Kreek, Eespere and Lemba, and the closing De profundis by Arvo Pärt. But in between, Orphei Drängar and their conductor Cecilia Rydinger Alin make a grand tour of Europe, taking in music by composers from the Nordic countries, France, Italy, Central Europe and the UK. Biblical Psalms have provided many of these with their texts, such as Milhaud (in French), Langlais (in English), Kreek (in Estonian) and Pärt (in Latin). Others – Lemba, Söderman, Sandström – have set portions of the text of the Catholic mass. Grieg and Biebl were both inspired by prayers in Latin, while Rossini chose to set one in Italian. For Nattlig madonna ('Nocturnal Madonna') the Finnish composer Nils-Eric Fougstedt selected a poem depicting the Virgin Mary with her newborn child by his compatriot Edith Södergran, while Bob Chilcott has chosen one by the Guyanese-British poet John Aagard, whose version of John Newton's Amazing Grace gives the background to the conversion of this 18th-century slave-trader turned abolitionist. Throughout a programme ranging from Rossini's Preghiera from c. 1860 to Sven-David Sandström's Sanctus, composed for the choir in 2010, Orphei Drängar and Rydinger Alin once again demonstrate the versatility and exalted standards that habitually causes the choir to be described as the finest male-voice choir in the world.

Mainly unfamiliar repertoire, in warmly blended performances by one of Sweden's oldest male-voice choirs. Rossini's Preghiera stands out for its charm and lightness of touch. The sound is plushly satisfying.

Orphei Drängar is a 160-year-old choir with a warm sound and a seeming inability to ever sound ugly, no matter the language they’re singing...Narrowing down my Recording of the Year list just got a lot harder.