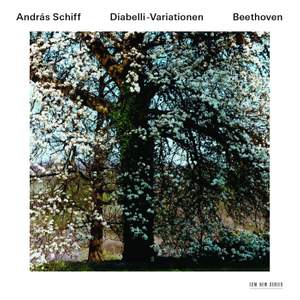 Schiff's passion for this music, and his ability to communicate it, is apparent in every bar...The two instruments he plays each have a lean tone and the interpretation of the Diabellis doesn't... — BBC Music Magazine, Christmas Issue 2013, 4 out of 5 stars More…

Beethoven’s Diabelli Variations are considered a magnum opus of the piano repertoire, a towering contribution to the genre and an entire encyclopaedia of pianism. Following his monumental exploration of the 32 Sonatas, András Schiff has recorded - on two period instruments - remarkable, contrasting versions of the Diabelli Variations alongside major late works with intrinsic ties to them.

This gives listeners a unique opportunity to compare the rich range of these highly contrasting sonic universes, a world apart from modern day instruments. The first is a studio recording from Lugano in December 2012, while the fortepiano version was recorded at the Beethoven-Haus in Bonn in July of the same year. In his liner note András Schiff acknowledges the value of having been able to consult the previously unknown original manuscript of the Variations which provided invaluable insight into Beethoven’s compositional process - with his penmanship and writing speed offering subtle hints as to crescendos, tempos and arcs of tension - and intentions.

Schiff's passion for this music, and his ability to communicate it, is apparent in every bar...The two instruments he plays each have a lean tone and the interpretation of the Diabellis doesn't alter much. Played on the Bechstein, the work's close relationship to Op. 111...is obvious.

I've been convinced of the success with which pianist and both instruments inhabit everything undertaken here. It's an impressive achievement.

No pianist has a greater awareness of sound-colour than Andras Schiff...The Brodmann, despite its relative lack of power, offers the broader palette. The Bechstein projects with greater strength and a beguiling singing tone.

That performance revels in the very lack of homogeneity in the soundworld of the instrument itself, with its distinctly different character in each register...Balances and perspectives shift constantly within the music, and Schiff exploits the effects quite wonderfully...The whole world of the variations opens out

The differences are fascinating...Yet either piano’s textures and reverberations would mean little without Schiff’s artistry and intelligence...The Diabelli Variations have never seemed so playfully filled with irony, comic pratfalls and the wild goose chase. Whatever instrument he uses, Schiff rewards the closest listening.

The predictably penetrating, intense playing of the mighty Diabellis on this disc is to be expected from Andras Schiff, but there’s a twist: he does them twice...The result is a primer on pianism.

The Independent on Sunday 27th October 2013

Something of a beauty contest is likely to ensue when the same work is played on two different instruments, and there is a surprising overall winner...[the Variations prove] more colourful and textural on the older instrument, with all its ticks, thuds and bell-like sweetness.