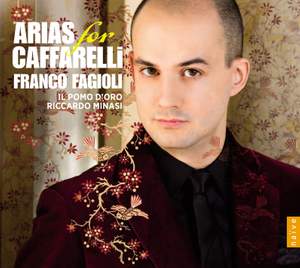 Recording of the Week,  Arias for countertenor/male soprano from Fagioli, Hansen, and Jaroussky

Argentine sopranist Fagioli scales the high Cs in a jaw-dropping recital of arias penned for the notorious star castrato Caffarelli, whilst Jaroussky explores music written by for his rival Farinelli by their mutual singing-teacher Nicola Porpora.

Thanks to his outstanding virtuosity and heart-rending expressivity, countertenor Franco Fagioli has turned to be one of the most exciting vocal artists of recent times. Frequent partner of Cecilia Bartoli, specialist in Handel and Monteverdi, he is now firmly established on the European Baroque scene.

'Arias for Caffarelli' is Fagoli’s debut album on Naïve and this release follows his recent triumph in the renowned Vinci 'Artaserse', also featuring Philippe Jaroussky and Max Emmanuel Cencic: “Franco Fagioli, in pure, resonant voice, gives an outstanding performance as Arbace.” The New York Times “Franco Fagioli, as Arbace, shows the largest vocal range from tenoral depth up to soprano.” Die Welt Castrato Caffarelli was probably the best rival of Farinelli in the 18th century in Italy (mainly in Napoli and Rome).

Caffarelli was renowned for both his extravagance and his extraordinary vocal skills. Recorded here for the first time, those extremely virtuoso arias by the most famous Neapolitan composers of that time were waiting to find a voice able to give them a new life. The full-colour 76-page booklet includes essays and pictures about eighteenth-century musical life in Naples, Caffarelli and Farinelli etc.

Throughout, Riccardo Minasi encourages the brass, in particular, to flare dramatically in support of the martial or otherwise militant feelings of the counter-tenor hero...Fagioli, for all his occasional exaggerations, remains a truly dramatic exponent of this repertoire and he evokes its milieu with panache and no little sensitivity.

I think I was about ninety seconds in when I decided that it was one of my records of the year...Fagioli takes it all in his stride with infectious brio: gleaming high As and Bs abound...Dazzled as I was by the vocal pyrotechnics, I couldn’t fail to notice the scintillating playing of Il Pomo d’Oro: sample the delightfully raucous natural horns in that opening track.

Fagioli can sound like a Cecilia Bartoli impersonator, with his ascents to soprano range and machinegun coloratura, but he captures Caffarelli’s reputed vainglory in Vinci’s splendidly trumpety martial number.

It's a jaw-dropping disc. Fagioli is one of today's great vocal technicians, and the ease and almost superhuman agility with which he attacks some of the big bravura numbers are simply staggering.