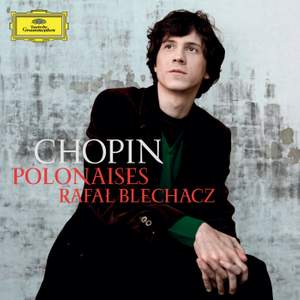 Displaying a brilliantly secure technique, the young Polish pianist is fully up to the challenges of these glittering pieces. He also feels the nostalgia and longing of the music, and hearing... — BBC Music Magazine, Christmas Issue 2013, 4 out of 5 stars More…

Rafal Blechacz’ recital of Chopin’s Polonaises will be welcomed by his large number of fans, who have eagerly awaited this release.

Blechacz’s way with Polonaises will be a landmark recording of this highly emotional, popular and poetic music. The recording will include seven Polonaises, one of which is the Polonaise No. 7 in A flat major, op. 61 “Polonaise Fantaisie”.

He is one of Deutsche Grammophon’s best-selling young artists – his stunning albums have sold more than 180,000 units worldwide.

His last album, featuring Debussy and Blechacz’s compatriot Szymanowski was named winner of the “Best Classical Album of the Year” at the Polish Fryderyk Awards and went Gold in his native country within a week of release in February 2012.

Displaying a brilliantly secure technique, the young Polish pianist is fully up to the challenges of these glittering pieces. He also feels the nostalgia and longing of the music, and hearing him play the Polonaises is like hearing an authentically Viennese performances of a waltz.

I think we all might agree on a new benchmark with the arrivel of this recording from Rafal Blechacz...It is a rare integrale in which every work is as technically successful and musically convincing as all its companions...this is Chopin-playing of the highest order, with recorded piano sound that far surpasses the earlier versions.

He has the requisite power to assert his presence, as Chopin so often does at the start of these pieces, but he also has the breadth of understanding to temper his tonal strength, depth and muscle with tenderness, lyrical warmth and a pianistic palette of both rich and delicate colours.

Temperamental and poetic, the Polish pianist Rafal Blechacz...is in his natural habitat here, playing with crisp rhythm and powerful sound.