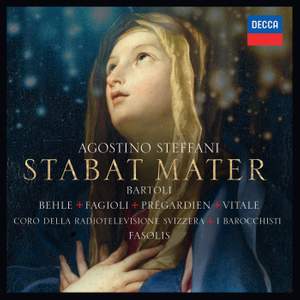 the choir of Radiotelevisione Svizzera is disciplined in the concise yet impressive eight-part Beatus vir and short antiphon Triduanas a Domino — Gramophone Magazine, November 2013 More…

Steffani: Non Plus Me Ligate

“La Bartoli sings as enthrallingly as ever, and with this new CD reasserts her place as No.1 in the international diva firmament.” Financial Times Germany on Mission

Cecilia Bartoli’s exploration of the music of Steffani continues on from her best-selling recording ‘Mission’ with an album of the celebrated Stabat Mater alongside Steffani’s greatest sacred works for chorus, orchestra and soloists, constituting the most comprehensive collection of Steffani’s sacred choral music on CD.

Steffani’s Stabat Mater is his masterpiece, completed shortly before he died in 1728. It has been described as the most powerful expression of his religious fervour and, at almost half an hour, the largest-scale, most complex and heartfelt of his compositions outside his operas. The opening solo “Stabat Mater dolorosa” featured on the ‘Mission’ DVD.

The album is completed by six world premiere recordings of the best of Steffani’s remaining sacred music, including Sperate in Deo and Laudate Pueri. These are scored for orchestra, chorus and soloists featuring two young baroque-specialist sopranos Nuria Rial and Yetzabel Arias Fernandez alongside Behle, Pregardien and Vitale.

Also amongst these world premieres is Non plus me Ligate, a seven-minute solo motet for Cecilia Bartoli.