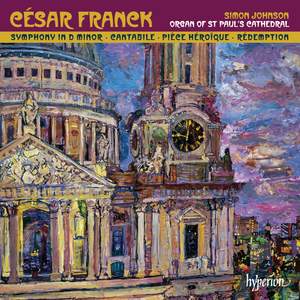 David picks out some of the finest recordings of Belgian organist-composer César Franck.

The Grand Organ (and massive acoustic) of St Paul’s Cathedral brings the symphonic organ works of César Franck to life, played by Simon Johnson, the current Organist of St Paul’s Cathedral. He plays his own transcription of Franck’s Symphony in D minor, a troublesome work which was despised by critics at its premiere. The paradox of the Symphony was memorably defined by Norman Demuth: ‘Never was there such magnificent music so badly written.’ The present transcription may be seen as an authentic response to that paradox, particularly since modern advances in console control enable Franck’s orchestration to be used as the outline for a detailed registration plan.

The ‘Symphonic Interlude’ that separates the two parts of the oratorio Rédemption has not acquired the popularity that it deserves. Franck described the subtext of the work as ‘the joy of the world, transformed and gladdened by the word of Christ’. It is built on two main thematic ideas, the first a gloriously noble tune that Emmanuel Chabrier described as ‘the very soul of music’, and the second an energetic peal from the trombones, with responses and modulations from the brass and woodwind. The two are developed and combined ingeniously.

this is a truly virtuoso display of organist, organ and, it has to be said, recording engineer...While I remain unconvinced by the Symphony's transcription...I am totally convinced throughout this splendid disc by Johnson's playing, which is superbly poised and magnificently self-assured.

The Pièce héroïque is in many ways an organ sonata by any other name, though with an advanced harmonic language and other twists on the traditional sonata form. Equally fascinating is the transcription of the Symphony for organ - an adaptation that sounds entirely natural, given Franck's lifelong affinity with the organ. Simon Johnson (the transcriber) is a commanding performer and the organ of St Paul's Cathedral really shines.