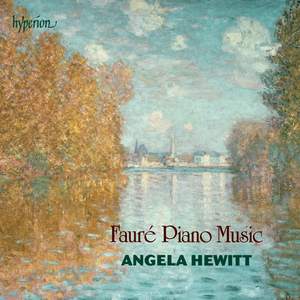 Angela Hewitt’s recordings of French piano music have received the highest critical acclaim, her ‘tenderness, Gallic wit, verve, and—the most important ingredient of all—charm’ proving perfect for works by Chabrier, Debussy, Ravel and indeed Rameau and Couperin. Now she turns to a composer who is more serious and introspective, with a refinement that has led to him being relatively overlooked by performers. But in Angela Hewitt’s hands this music is an utter joy.

This album includes the major work Thème et variations, Op 73—one of Faure’s greatest works for piano—and a selection of Valses-caprices and Nocturnes. It ends with a more radiant piece from Fauré’s youth, the earliest piece included on this recording—the Ballade pour piano seul, Op 19, dedicated to Saint-Saëns.

an exquisite Faure recital...The purity and strong, supple backbone of her playing lets Faure's inventive genius, his extraordinary sensitivity to colour, harmonic shading, texture and eloquence, shine on its own terms...Hewitt can draw us into Faure's unique bubble and simply envelop us in his cool, self-sufficient gorgeousness

She brings not just an intimate grasp of the music’s harmonic and technical demands, but an essential refinement – most evident in the Theme and Variations, in which she finds élan, lightness and grandeur without overemphasising the differences between the 11 variations.

turning convention topsy-turvy, she reminds us in her vehement, brightly lit performances that Faure objected to pianists who play his music 'with the shutters down'

She plays this repertoire with real vitality and extroversion...Her sense of phrasing and sense of continuity in the three Nocturnes is Collard-like in intimacy and sensitive proportion.

It's a very thoughtfully planned sequence, beautifully executed; the sharply contrasting characters of each of the variations...are perfectly focused, while the joyous exuberance of the early Ballade sweeps all before it...All these pieces are presented with exemplary clarity and wonderfully crystalline tone.

Particularly masterly are the variations, the heartbreaking 7th and final 12th very lovely. Hewitt observes that Fauré, who did not die until 1924, was born in Schumann and Chopin’s lifetimes: the pianism and songfulness show their legacy.