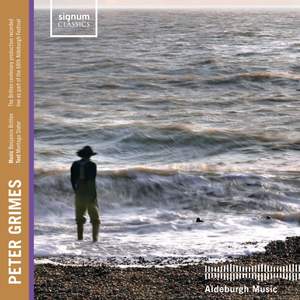 [Bedford] has the sea-swell of the work deep in his bones...[Oke's] is a strong, ballasted performance, less purely plangent than many, but deeply moving in its simple strength and keen imagination...There's... — BBC Music Magazine, November 2013, 5 out of 5 stars More…

The truth - the pity - and the truth (Peter, Ellen)

I'll have to go from pub to pub (Hobson, Ellen, Ned, Chorus)

Let her among you without fault (Ellen, Hobson, Mrs. Sedley, Ned)

And do you prefer the storm (Balstrode, Peter)

They listen to money (Peter, Balstrode)

There's been a landslide up the coast (Fisherman, Boles, Balstrode, Auntie)

Pub conversation should depend (Balstrode, Chorus)

Have you heard the cliff is down (Ned, Auntie, Mrs. Sedley, Chorus)

Now that the daylight fills the sky (Ellen, Rector, Chorus)

Child you're not too young (Ellen, Rector, Peter, Chorus)

Shall we go and see Grimes in his hut? (Rector, Swallow, Balstrode, Mrs. Sedley, Boles, Chorus)

From the gutter (Nieces, Auntie, Ellen)

They listen to money (Peter)

Assign your prettiness to me (Swallow, Nieces, Ned)

Murder most foul it is (Mrs. Sedley, Ned)

Embroidery in childhood was (Ellen, Balstrode)

Who holds himself apart (Chorus)

To those who pass the Borough (Swallow, Fisherman, Auntie, Boles, Chorus)

Britten’s powerful and masterful evocation of the North Sea in all its moods has become inextricably linked, to audiences all over the world, with the Aldeburgh that was home to Crabbe in the 18th century and Britten in the 20th. Steuart Bedford leads a vast and accomplished group of performers on this new recording, created shortly before the company performed the work on the beach at Aldeburgh as part of the festival, further celebrating Britten's centenary year, 2013.

[Bedford] has the sea-swell of the work deep in his bones...[Oke's] is a strong, ballasted performance, less purely plangent than many, but deeply moving in its simple strength and keen imagination...There's much to relish throughout this hand-picked cast.

There is something of Britten himself in Peter Grimes… premiered nearly 70 years ago – but Britten’s finest works are more relevant than ever, and continue to prove the magic and power of opera

This is an expertly paced performance, as one might expect with Steuart Bedford as conductor, building the tension incrementally...[Oke] is heard to best effect when Grimes is peering deep into his soul...Allen's urgent Ellen Orford is well in the picture, though she does not always sound ingratiating, and David Kempster is a stalwart Balstrode.

A fine memento of a thrilling performance

Alan Oke offers a poetic, masterful reading of the title role. Giselle Allen's anguished Ellen Orford and a characterful ensemble of Borough folk make the drama immediate and transparent. If this were my only Grimes recording, I would be happy.

It mixes professional forces assembled by Opera North with a student chorus and orchestra, both of whom make youthfully fresh and committed contributions which the composer would doubtless have appreciated...a performance with more guts and energy than high polish.

this release has strong presence. Steuart Bedford’s conducting is pacey and brings out the violence of the piece, and the Britten-Pears Orchestra rips into the score...Oke’s Grimes is a damaged soul from the start...Allen sounds a mature but intense Ellen, David Kempster a humane Balstrode.

All is taut, tense and claustrophobic, the rich Snape acoustic adding to the pleasure. The orchestra playing is incisive, occasionally brash but thrillingly alive, and the all-important chorus, drawn from Opera North and the Guildhall School, is among the greatest on disc.