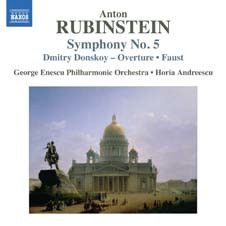 Anton Rubinstein was one of the towering figures of nineteenth-century music, a great piano virtuoso, conductor and influential teacher. The fifth of his six Symphonies is thoroughly Russian in its melodies, and is often compared to his student Tchaikovsky’s First Symphony. The overture to Rubinstein’s first opera Dmitry Donsky is based on a similarly national Russian theme, while Faust, written in Leipzig in 1854, is the sole surviving movement of an abandoned Faust symphony. Rubinstein’s Symphonies Nos. 3 and 4 can be heard on Naxos 8555590 and 8555979.

Russian folk-style themes and Medelssohnian treatment make for a decent symphonic shot in Rubinstein's Fifth - if a bit anachronistic for 1880.

The orchestra, as if aware that this is music of real substance, plays well and with plenty of fire and passion.